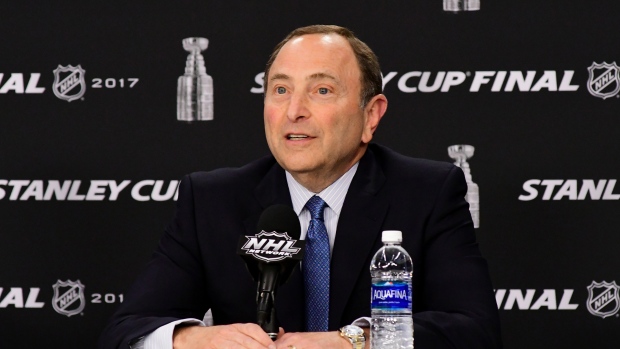 The NHL hopes to move ahead to “Phase 2” and begin opening team practice facilities for small group workouts in the “mid-to-later portion of May,” the league said Wednesday in a memorandum distributed to teams and players.

“While the precise date … remains tentative and as yet undetermined, we do feel that we may be able – provided we continue to trend favorably – to move to ‘Phase 2’ at some point in the mid-to-later portion of May,” deputy commissioner Bill Daly wrote in the memo.

Daly wrote that the league’s plans for Phase 2 will be subject to “potential competitive concerns as between disparately situated markets.”

That was one of the big concerns among teams with the NBA’s plan, released to teams earlier this week, which intended to open some team facilities no earlier than May 8. Each club is facing different local government restrictions. In some markets, the restrictions are beginning to be eased, while other hotspots are still facing lockdown conditions.

Any return to play plan would need to be approved by the NHL Players' Association. The joint NHL-NHLPA Return to Play committee was scheduled to meet again virtually on Wednesday, after players have begun to voice their concern about being away from their families for an extended period of time on Tuesday.

In Wednesday's memo, the NHL also advised players who are currently sheltering outside of their team’s city should “consider whether to plan to return to their club cities,” noting that they may face a mandatory 14-day quarantine once they arrive there.

Travel may prove most difficult. The U.S.-Canada border remains closed to non-essential travel. Air Canada does not have any flights scheduled to cross the border through May 22.

Players currently positioned at home in Europe may not have the ability to fly to their NHL city commercially until June at the earliest.

Wednesday's memo comes as groups of NHL players have only recently returned home. For instance, a group of Swedish-born NHLers met in Nashville just last week to share a chartered jet back to Scandinavia. They may now have to make a similar arrangement to return back to North America with few other options available.

Hockey’s international flavour is one reason why the NHL faces the stiffest challenge among North American major pro sports leagues to resume the season. A quarter of the league’s 31 franchises are based in Canada, while nearly one-third of the NHL’s active players this season (304) hail from Europe, including large blocs from Sweden (113), Russia (50), Finland (49) and the Czech Republic (33).

After Phase 2, which includes players training in small groups at team facilities, Phase 3 involves the opening of training camps, and Phase 4 would mark the return to game play.

As previously reported on TSN's Insider Trading, the NHL has plenty of runway to complete the 2019-20 season, as the next 2020-21 campaign does not need to begin until mid-December to still allow for a full, 82-game season.

Until a firm date is established and more formal details set the framework for Phase 2, Wednesday’s memo effectively extended the league’s directive for players and teams to self-quarantine. A more formal announcement with that extension could come on Thursday, when the current directive expires.

Wednesday marked Day 48 since the NHL hit pause on the season on March 12.