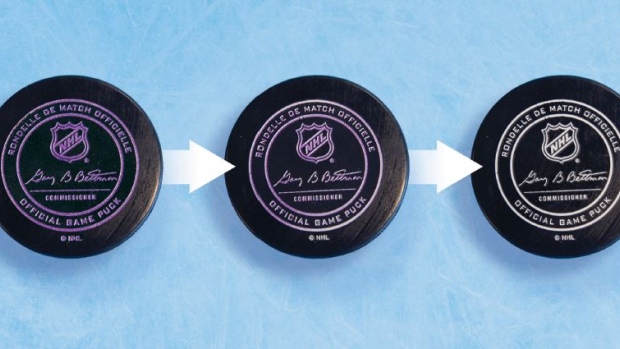 The average NHL puck is kept at a temperature between minus-10 and minus-7 Celsius before it hits the ice in a game.

Everyone knows that a frozen puck slides smoother and faster.

Once it’s out of the freezer and in play, though, it’s much more difficult to tell how quickly a puck has thawed.

That’s why the NHL is set to test official game pucks featuring a thermochromic coating, which will change the colour of the league’s logo on the back of the puck from purple to white when the puck’s temperature rises above freezing, to serve as a visual indicator to officials that the puck should be replaced.

The NHL will first test the thermochromic puck at the 2019 Winter Classic at Notre Dame Stadium between the Chicago Blackhawks and Boston Bruins. The coated pucks will then be further examined during other significant events, including the 2019 All-Star weekend in San Jose, Calif. on Jan. 24-25, for potential future league-wide inclusion.

“Freezing a puck eliminates bouncing, and game officials closely monitor the puck for temperature changes that affect performance in play,” said NHL senior vice president of facilities operations, Dan Craig, in a statement. “A coating that changes colour when the puck is above freezing will more accurately alert the officials that it is time for a replacement.”

The key in testing the NHL’s latest gizmo over a full game will be determining whether the thermochromic coating increases friction between the puck and the ice. Promotional stickers slapped on pucks often have that unintended effect.

The NHL and partner PPG Paints do not envision that issue, saying the thermochromic coating is dispersed into an ink system and screen printed directly onto an official NHL game puck.

An average of a dozen pucks are used in a single NHL game. As many as 22 have been used in one game; the last game in which a single puck was used was 1979 - and that puck resides in the Hockey Hall of Fame.

Every official NHL puck is manufactured by InGlasCo in Sherbrooke, Que. Each NHL team uses approximately 1,500 pucks per season.