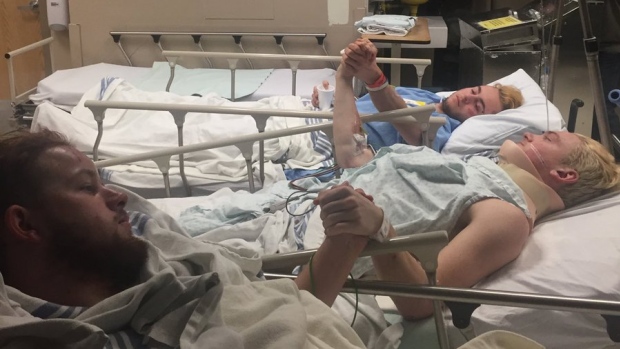 HUMBOLDT, Sask. — Assistant coach Chris Beaudry was 20 minutes behind the Humboldt Broncos’ team bus when he got the call.

It was from his Nipawin Hawks counterpart saying he heard about an accident. Beaudry pulled over to try and reach Broncos on the bus.

“No one answered,” Beaudry said. “So I just hammered down and got to the scene."

His first thought was: “Not again.” Beaudry was coach of the nearby Naicam Vikings men’s senior hockey team when they were involved in a fatal bus accident in 2011.

Not even that carnage could prepare Beaudry for what he was about to face.

“This was beyond worse,” Beaudry told TSN. “It was immensely, way worse. It was nothing I’ve ever seen before. It was massive. The area of debris was yards and yards and yards.”

Beaudry said he was kept 50 yards back from the crash by the more than 50 first responders who rushed to his team’s aid. He was asked to sit in a fire truck to wait helplessly.

Beaudry said it felt like hours before he left for Nipawin Hospital with Broncos team chaplain Sean Brandow.

“You’re lost,” Beaudry said. “I tried not to look at the scene. After you see it for a couple minutes, you know it’s not really changing.

“You look at that and you know there’s people that have died. They are your boys.”

His eyes welled up and his lip quivered.

“What do you tell their parents?” Beaudry asked. “I’m here to protect their kid and bring them home and … you don’t.”

That is why Beaudry, a hockey-obsessed farmer who grows canola, wheat, barley and peas on his family farm in St. Front, Sask., drives an hour to and from Humboldt, population 5,800, every day for practices and games.

“It’s to help the kids,” Beaudry said. “Everyone knows there is no money in junior hockey.”

But Beaudry decided that helping coach the Broncos would be his way to pay it forward on the fourth anniversary of his sobriety, his way to “serve others.” He’s put 39,000 kilometres on his truck this season alone, his first behind the Humboldt bench with coach and general manager Darcy Haugan.

“It wasn’t about the time that it takes to drive,” Beaudry said.

That drive is why Beaudry wasn’t on the Broncos bus to begin with. Since St. Front is 100 kilometres east of Humboldt, he didn’t usually take the team bus to eastern SJHL road games in Nipawin, Melfort or Yorkton. Beaudry said that by the time the Broncos showered and eat after those road games, he could have been nearly home.

Friday turned out to be the second time he narrowly escaped harm. In 2011 with Naicam, Beaudry was the only person on the bus injured when a drunk driver hit the bus head-on doing 135 kilometres per hour.

“We were 30 seconds [away] from every player on the team being out in front of the bus taking a leak when they hit us,” Beaudry explained. “The people that hit us died.”

Beaudry ended up with compartment syndrome in his leg. On Friday night, Beaudry would likely have been sitting near Haugen and fellow assistant coach Mark Cross, who were among the 15 to perish, alongside radio broadcaster Tyler Bieber and bus driver Glen Doerksen.

Friday night’s accident will leave an everlasting scar on Beaudry and the hockey world.

When he arrived at Nipawin Hospital, the RCMP asked him to help put together the bus passenger manifest so they could begin to sort out the survivors.

While at the hospital, Beaudry fielded anguishing calls from player’s parents who reached out in desperation for answers that he didn’t have to give them. It took hours to sort through the wreckage and identify players, plus they were airlifted to different hospitals.

By then news about the accident started to spread, first in rural Saskatchewan and then around the world.

“The support has been unbelievable,” Beaudry said. “Everyone talks about the hockey community and how good the people are in it, but you don’t understand it unless you live it. From the water boy, to the media to the coach and players, everyone is your brother.”

Saturday Beaudry made the drive into Saskatoon to see survivors.

“The hospital brought my spirits up, to see guys happy when I came in,” Beaudry said. “They were under a lot of medication, but they would hear my voice and I would see a hand reach out. I would just pray, hold their hand.”

Then he drove back to Humboldt’s Elgar Petersen Arena to grieve and help pick up the pieces as one who was somehow spared.

“The smell is here, the feel is here,” Beaudry said of the Broncos’ home. “But it’s not the same.”