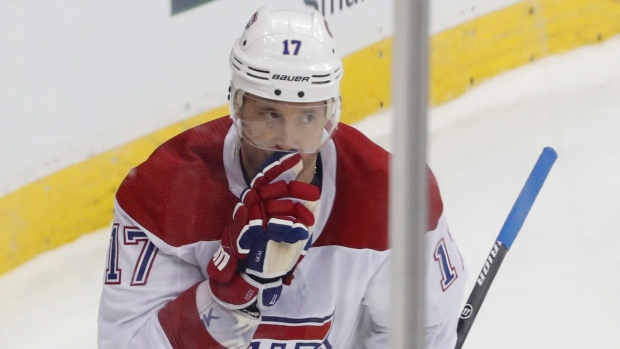 The legend of Ilya Kovalchuk grew in Montreal just a bit more on Tuesday night, with the Russian sniper continuing his unlikely renaissance in Le Bleu, Blanc et Rouge.

Kovalchuk, 36, shushed the hostile crowd in New Jersey after delivering the shootout dagger in his old hometown.

He didn’t officially get credit on the scoresheet for what would’ve been his third game-winning goal in 13 contests with the Habs. But he keeps scoring, with five goals and 10 points, since being signed off the scrap heap after sitting as a healthy scratch consecutively from Nov. 9 to Dec. 16, when the Los Angeles Kings agreed to mutually terminate his contract.

Kovalchuk is playing on a league-minimum, pro-rated $700,000 contract. He is a prime candidate for GM Marc Bergevin to flip at the trade deadline, which is why he is No. 3 on TSN Hockey’s latest Trade Bait board.

Everyone wants to know: What could Kovalchuk fetch for the Habs on the open market?

The consensus seems to be a mid-round draft pick, according to a straw poll of league executives.

“I think a fourth-round pick is the best they’re going to get at this point,” one assistant GM wrote on Wednesday. “But if we keep seeing these goals for the next three weeks …”

The manager then put the eyeball emoji 👀 as his thought trailed off.

“A third or a fourth,” another said.

“That certainly seems reasonable under the circumstances,” another East executive said.

But that seems to be the ceiling.

“I don’t think they can get a second-rounder,” he said.

TSN's Ray Ferraro joined Melnick in the Afternoon to talk Kovalchuk, Kotkaniemi, the Senators, and much more.

A second-round pick plus a prospect seems to be the going rate for some of the other players with more dimension to their game – like Kings defenceman Alec Martinez. There aren’t many on the Trade Bait board this year who will land a first-round pick in return.

So, if a fourth-round pick is all that Bergevin can bring back for Kovalchuk, is there any chance the Canadiens hang on to him?

“If they were smart, they would keep him,” one GM said. “It has been a great signing.”

Clearly, Bergevin expected the Habs to be more competitive this season. But with this season’s playoff flame all but extinguished, there is already an eye toward next year. If Kovalchuk can score 15 to 20 goals next season on a value contract, it might be a boon for Bergevin.

One agent who does not represent Kovalchuk said he would propose a one-year deal that hinges on performance-based bonuses, available only to players 35 and over.

That way, the Habs – or any team that signed him to a similar deal in the future – would only be on the hook for $1 million on the cap until the bonuses are triggered.

No matter how good the fit has been, the tougher part might be convincing Kovalchuk, who is chasing that elusive Stanley Cup, that the Habs will be close enough next year to take a real run.