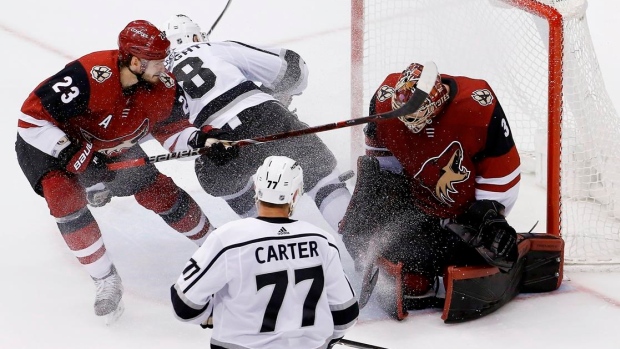 Coach's challenges for goaltender interference and the ensuing arguments aren't going away.

There will just be a new place to direct the complaints.

With the goal of refining the consistency of goalie interference challenges, NHL general managers on Wednesday recommended shifting the decision from on-ice officials to the league's situation room in Toronto. The change could go into effect as soon as the playoffs, which begin April 11, after the NHL Players' Association signed off and now just needs approval from the board of governors.

"The players want consistency in the application of the rule, and therefore support this proposed change in order to help accomplish that goal," said NHLPA special assistant to the executive direct Mathieu Schneider said after consulting with competition committee members and other players.

Commissioner Gary Bettman said only perhaps a half-dozen of about 170 challenges this season were controversial, yet GMs overwhelmingly were in favour of a centralized location for final decisions.

"The objective is to be as close to perfect as possible," Bettman said, noting goalie interference is a judgment call. "The recommended change is intended to help resolve the rare cases in which the situation room and the referees might have different opinions of a particular play and is intended to produce more predictability for our players and coaches."

Currently, on-ice officials have the final say on whether a goal should count or be disallowed when challenged. Under the proposed change, the officials would continue to be involved, but a member of the NHL Officiating Management Team — made up of former referees — would be part of the decision-making process.

Washington Capitals coach Barry Trotz said this won't affect how he approaches challenging goalie interference but believes having someone outside the area making the call is a positive.

"There's some referees who are more established and, I'd say, sure of themselves, they won't reverse the calls," Trotz said. "They almost say, 'That's the way I saw it and that's the way it is and live with it.' And others get swayed by what they see or maybe the crowd or another coach or how the game's going.

"So it's no different than the student marking their own papers. Let's have a non-emotional person who has no skin in the game and is not in an emotional environment to make those calls and I think you'll find it will be more consistent."

Coaches and goaltenders have complained about the inconsistency all season. Bettman said during All-Star weekend in late January that officials might be "overthinking" reviews and that the intent was, "Take a quick look, but don't search it to death."

The league sent a memo to all teams outlining the standard, which is closer to what Dallas Stars coach Ken Hitchcock prefers. Hitchcock said he and his colleagues want to lean toward allowing more contact and counting more goals.

"We're tie goes to the runner," Hitchcock said. "I think that's how a lot of the coaches feel is that when you see a situation that is a positive-area sacrifice (for players), give the runner the benefit."

It took years of debate for GMs to approve coach's challenges for offside and goaltender interference, which are in their third season. The grey area in interpretation still causes issues.

"I don't know what is and what isn't," New York Islanders coach Doug Weight said recently. I think there's a lot of confusion. That's tough. It's frustrating for us."

The hope is to lessen the frustration by letting a rotation of former officials take over. But nothing about the way goalie interference is called is being changed.

Former player Ray Ferraro suggested adopting the international standard that says a goal is waved off if a skater interferes with a goalie's positioning but allows it to count if the goalie initiates contact.

"You're never going to find a solution for this because what you see when you're 200 feet away in a press box is different from what you see on TV, which is different from what is happening on the ice," goaltending analyst Justin Goldman of The Goalie Guild said. "I feel bad for the referees because it's so hard to make that call in that moment, but to go to Toronto and expect Toronto to get it right every single time, you're at the mercy of what they're seeing on a TV screen, not what actually happened on the ice. For the goalies, that's super frustrating."