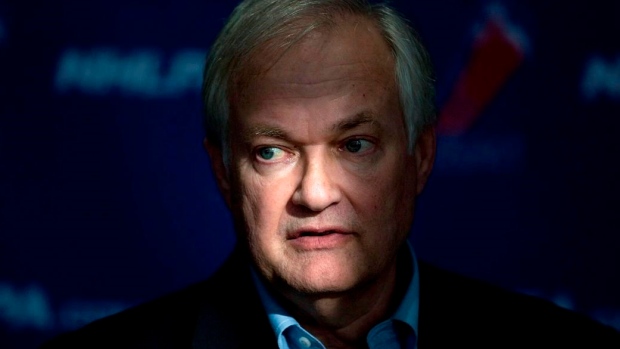 CHICAGO — To poke or not poke the bear: that is the question staring down the NHL Players’ Association as they convene here for a meeting on Wednesday evening.

In this case, that bear is commissioner Gary Bettman and the NHL’s Board of Governors.

The NHLPA has until Sept. 15 to notify the league that the union intends to exercise its option to opt out of the current Collective Bargaining Agreement (CBA) after this season.

The NHL, of course, declined to exercise their same option on Sept. 1, putting the ball in the players’ court.

“It is our hope that a continued, sustained period of labour peace will enable us to further grow the game and benefit all constituent groups: NHL Players, Clubs, our business partners and, most important, our fans,” Bettman said in a statement on Friday.

The NHL and NHLPA have been conducting CBA negotiations off and on for the last number of months. Both sides have reported that discussions have been overwhelmingly positive, with some saying that the dialogue and communication has been more constructive and productive than it has been in a decade or more.

“It doesn't mean there haven't been disagreements and significant disagreements but it's so far at least free from rancour,” NHLPA executive director Don Fehr said after Wednesday’s meeting. “That's a big improvement."

In fact, there is even some optimism that a new CBA can be hammered out in the next 10 days before the NHLPA’s deadline to opt out.

If the NHLPA declines, the current CBA will remain in effect for three more seasons, through 2021-22.

The key to remember is that if the NHLPA does indeed opt out this month, nothing would preclude both sides from continuing negotiations over the next months in an effort to agree on a new CBA before it expires on Sept. 15, 2020.

That is why many believe Fehr will play the opt-out card, using the leverage he has to tackle the items on the union’s agenda.

Fehr addressed the media following Wednesday night's Executive Board meeting in the Windy City, where players are gathering this week ahead of the annual NHL/NHLPA North American Player Media Tour.

He said no decisions have been made and were not scheduled to be made on Wednesday. The two sides are scheduled to meet again on Friday in New York City.

However, the NHLPA knows opting out at a time when Bettman and the NHL have already laid down their arms may come at a cost.

If the ask is too great and talks drag out, Bettman might begin to dig in and pursue items on the owners’ wish list. Those items could include anything from contract term limits, to a greater piece of the revenue pie, to non-guaranteed contracts – the last of which would likely be the hill the NHLPA dies on.

For now, any threats to go down that road have been mere whispers.

“In any CBA, the parties can always identify issues they are unhappy with and would like to see changed. This is certainly true from the League’s standpoint,” Bettman said Friday. “However, our analysis makes clear that the benefits of continuing to operate under the terms of the current CBA – while working with the Players’ Association to address our respective concerns – far outweigh the disruptive consequences of terminating it following the upcoming season.”

There is a certain element of MAD Theory (Mutually Assured Destruction) in play here with the threat of a fourth potential work stoppage on the table.

We know what the players want. They’ve been shouting it from the rooftops.

First and foremost is a more palatable escrow percentage, because escrow is the dirtiest word in NHL dressing rooms.

“A. Escrow and B. Escrow,” Blackhawks captain Jonathan Toews told reporters in June when asked about his top two CBA priorities.

Toews doubled down in an interview with the Arlington (Ill.) Daily Herald this week, saying: “All I see is that I've signed a contract and to me it's not exactly being honoured. So I don't care what business you're in – to me that's kind of ridiculous.”

The problem is escrow isn’t going anywhere. It is a function of the cap, money set aside to ensure a perfect 50-50 split of revenues between players and owners.

There is a myriad of ways to lessen the blow and bring it to a more manageable percentage, like two or three per cent.

Since every dollar spent by NHL GMs over the NHL’s league-wide salary cap midpoint this season ($71.5 million) is one dollar the NHLPA must set aside in revenue, a luxury tax could be enacted to have each team chip in their same amount spent to remove escrow entirely – that would balance it out and ensure a 50-50 split. But that seems rather unlikely.

The NHL and NHLPA could artificially base the cap off of, say, 43 or 44 per cent of the league’s projected revenue, and if the league revenue hits projections, the players would then receive a cheque at the end of the year for six or seven per cent. Call that a “bonus.” That would also reduce the need for a large escrow deduction.

Secondary items on the players’ wish list include an agreed upon international hockey calendar, with guaranteed NHL participation in the Olympics, as well as health care and retirement considerations, and potentially reform on the impact restricted free agent players are having on the salary cap with their second NHL contract.

Whether any one of those items is enough to derail the puck dropping next September is an answer we might have in the next few days.