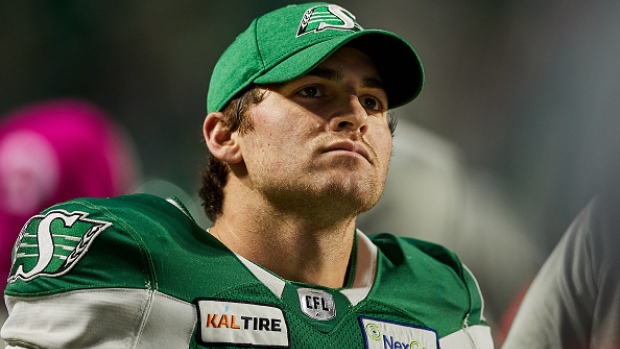 As events across the globe continuously evolve – hour by hour – amidst the COVID-19 crisis, the Canadian Football League announced Monday that its training camps are indefinitely postponed.

Now, there are many questions surrounding the 2020 CFL ​season. Some of the league’s starting quarterbacks tell TSN they – like every other professional athlete – are trying to adapt to an unpredictable life, on and off the field.

Notwithstanding worldwide events, new Ottawa Redblacks quarterback Nick Arbuckle is full of excitement for what 2020 will offer his family. Arbuckle and his wife, Zakiyyah, are expecting their first child in May, and the couple recently moved to Ottawa so Arbuckle could continue his off-season training ahead of his first year as a CFL starting quarterback.

However, the current restrictions at the Canada-U.S. border mean both Arbuckle and his wife’s families will not be able to travel north of the border for the birth.

“Mentally, [we are] trying to prepare for delivering a baby and having a baby without the possibility of our family being able to come up to Canada for the birth and to see the baby for first month or so," said Arbuckle. "We're just praying for things in the world to get settled, and get better."

While Arbuckle insists his main concern is the health of his wife and child, the 26-year-old has not let limited access to CFL facilities – currently restricted only to players requiring rehab treatment – curtail his preparation.

"To keep exercising has been a huge part of my mental health, to get through problems by staying active and feeling like I'm accomplishing something through that," Arbuckle said. "And if I can help anybody out there do the same thing, all it takes is a camera to show people what I'm already doing."

Arbuckle understands the reasoning behind postponing training camp, but is looking for more answers from the league on a plan for a 2020 season, especially if the scheduled number of games is ultimately shortened.

“My biggest concern is obviously the pay and how that will work,” Arbuckle said. “Do veterans get paid for the games missed? I mean, we signed contracts for the year, and we committed ourselves to the league, so I hope that’s reciprocated.”

Following the CFL’s Monday announcement that camps will be postponed, the CFL Players Association issued its own statement stating the players and the league are continuing to evaluate recommendations of health and government officials.

“Hopefully we have an answer and a plan for what the season will look like soon, so that all the players and staff members of the league can develop alternative living and work plans for the rest of the 2020 season, if necessary,” Arbuckle said.

Arbuckle is in a unique situation living in Canada during the off-season. Many CFL players live in the United States, including Saskatchewan Roughriders starting quarterback Cody Fajardo, who currently resides in Silver Spring, Md.

Beyond international health and safety, the CFL will look to the re-opening of all travel between Canada and the U.S. as a sign the football season might finally proceed. Fajardo is reaching out to Roughriders teammates, and several other CFL players, to offer advice and listen to growing concerns from American-based players.

"It's going to be tough [for some players] to make some financial decisions," said Fajardo. "You're not making a lot of money, and with the Canadian dollar going down you have to make some life decisions for your family. Do you wait for football, or do you make the tough decision to take a job or start a career?

"I've just tried to stay positive with our guys."

Fajardo calls himself an optimist and is attempting to worry less about Canada-U.S. border relations and more about being a positive influence on CFL fans.

Fajardo spent the last few weeks reaching out to football fans on social media, and is expecting to work alongside the Roughriders to produce content to reinforce messaging from health care and government officials.

“Part of the reason I am so positive is there is too much negative out there," Fajardo said. "And who I am in my faith, and how I was raised by my parents, is to be a positive light for people, because you don't know what they're dealing with.

"I told myself – didn't matter what team I was on – if I got the opportunity to be a starting quarterback, I would use that platform."

Veteran CFL starting quarterback Trevor Harris has also tried to use social media as a means to offer fans the briefest, most beneficial moment of distraction.

Last week, Harris started the #FootBounceChallenge, testing how many times the CFL’s best players could bounce the conical ball in 15 seconds. Inside a week, several current and former CFL quarterbacks and players, including CFL Hall of Famer Doug Flutie, have taken up Harris’s challenge across Twitter and Instagram.

Harris also continues to speak with people around the league, and simply wants to keep his mind fixed on preparing for the 2020 season.

"My prep is unaffected," Harris said. "I haven't missed a day and I'll be ready in a day's notice to report [for training camp]."

And while every CFL player waits to hear when the 2020 season will begin, if at all, Arbuckle also understands, right now, football and sports are immaterial to more important concerns.

"At the end of the day, I understand that [the CFL postponing training camp] is necessary," said Arbuckle. "We have to do what's best for the country."