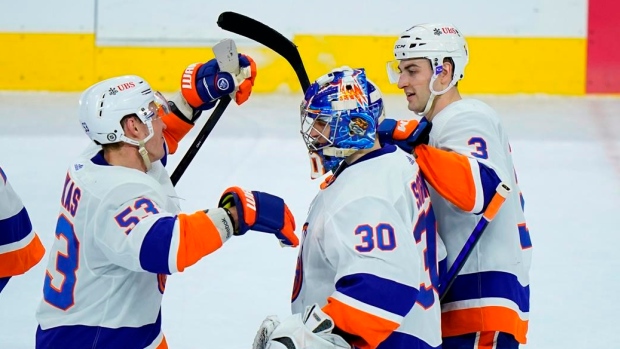 PHILADELPHIA — Nick Leddy scored 2:23 into overtime and Ilya Sorokin made 30 saves to lift the New York Islanders to a 1-0 win over the Philadelphia Flyers on Sunday night.

After both goalies were stellar throughout the contest, Leddy scored a fluke goal when his backhand pass went off the stick of Flyers defenceman Travis Sanheim and through the legs of goalie Brian Elliott.

“I think it was more of a fortuitous bounce than anything,” Leddy said.

The victory sent the Islanders past the Pittsburgh Penguins into second place in the East Division. New York is two points behind first-place Washington.

“We weren’t as sharp as we needed to be,” Islanders coach Barry Trotz said. “But at the end of the day, a huge two points. Huge.”

Elliott made 27 saves, including several stellar stops late in the third period.

Philadelphia is nine points back of Boston for the final playoff spot in the East Division.

It was the sixth time in eight games in the season series that the game went past regulation.

Jordan Eberle and Jean-Gabriel Pageau assisted on the game-winner that ended a long scoreless drought. The Islanders hadn’t scored since early in the second period two games ago, a span of 159 minutes, 27 seconds of game time.

Sorokin improved to 5-0-1 in six games, five of which were starts, against the Flyers.

“I felt good,” Sorokin said. “I think about what I should do in the moment and don’t think about results and not what (happened) a few games ago.”

He kept the Islanders in the game with 23 saves through the first two periods, including several quality chances. His sprawling glove save on Travis Konecny’s great chance was a highlight of the second, following several strong stops late in the first that also included a denial of Konecny.

“We don’t win that hockey game if he doesn’t have that first period,” Trotz said. “We were slow out of the gates, we weren’t sharp, we weren’t committed to the battle. You need your goaltender to sometimes steal us a game; he stole it in the first for us.”

Said Flyers coach Alain Vigneault, “The first and second periods, we had some great looks. Their goaltender made some real big saves at the right time. In my estimation, we had enough looks in those two periods to get a couple.”

The Islanders found their offence late in the third, but this time Elliott was up to the task.

After a good pad save on Casey Cizikas, Elliott denied Kyle Palmieri with a glove stop with 7:11 remaining in regulation and snared Andy Greene’s hard slap shot 31 seconds later.

Both goalies came up big in overtime, with Sorokin using his pad to deny Ivan Provorov 23 seconds into the extra session and Elliott keeping Brock Nelson’s backhander out of the net with an excellent save.

The Flyers honoured Oskar Lindblom on Hockey Fights Cancer Night in Philadelphia. Lindblom was diagnosed with cancer in December 2019, returned for two games at the end of last season following treatment and recently revealed that he is cancer free.

During the pregame skate, Lindblom took an honorary lap around the rink by himself, something that usually is reserved for rookies making their debuts. And his Flyers teammates all donned Lindblom’s No. 23 during warmups. He received a loud ovation when introduced.

Braydon Coburn made his Islanders debut after being acquired for a seventh-round pick from Ottawa on April 11. The veteran defenceman replaced Noah Dobson, who was a healthy scratch. Part of the reason Trotz put Coburn in the lineup was his familiarity with Philadelphia after playing 576 games over nine seasons for the Flyers.

Islanders: C Josh Bailey and RW Cal Clutterbuck each missed their second straight contests with undisclosed injuries. Trotz said prior to the game that both are day-to-day.

Flyers: G Carter Hart (lower body), forward Tanner Laczynski (lower body) and C Nolan Patrick (upper body) each sat for the second straight game. Hart is off the ice until Tuesday while Laczynski and Patrick skated on Sunday and are day-to-day, Vigneault said.

Islanders: Host the Rangers on Tuesday.

Flyers: Play the first of two games in as many nights against the Rangers on Thursday.