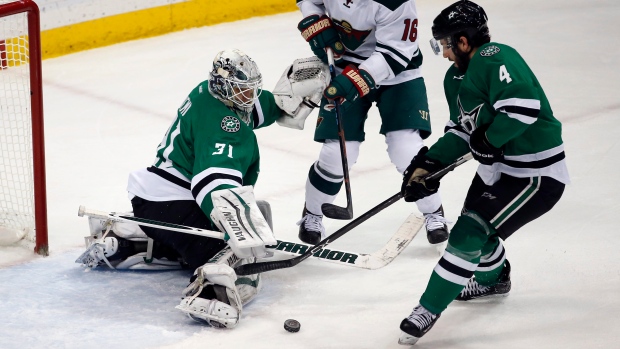 ST. PAUL, Minn. - Down by a couple of goals midway through the game, the Dallas Stars didn't panic. And by the time it was over, they had picked up two crucial points against a division foe.

Vernon Fiddler scored twice for the first-place Stars, who have won five of seven and are 8-2-2 in their last 12 games. Jordie Benn, Tyler Seguin, Antoine Roussel and Cody Eakin also had goals.

The Stars improved to 4-2-0 against division foes.

Last season, Dallas had the worst record within the division (8-14-7) and missed the playoffs. The Stars' next three games are home Tuesday against Chicago and a home-and-home set with St. Louis immediately after Christmas.

Dallas has an eight-point lead over the Blackhawks and Blues.

"It's such a strong division that they're all going to be great games," Fiddler said. "Minnesota's a great team, Chicago, St. Louis, you could go right down the line."

Jared Spurgeon, Charlie Coyle and Nino Niederreiter scored for Minnesota, which lost its second in a row after getting points in nine straight. Minnesota is 7-5-4 against the other six division teams.

"We want to prove that we're one of the top teams in the league. It was a good opportunity to do that tonight," coach Mike Yeo said.

Trailing 2-0, and with Niemi having replaced Kari Lehtonen in the first period, Dallas scored three times in 4 1/2 minutes late in the second to take the lead.

"They want to be physical and we know we're a fast, skilled team. We respond well. We weren't ready right away but we got back in the game and took over," Seguin said.

Less than a minute after a Jumbotron comparison of Yukon Cornelius from "Rudolph the Red-Nosed Reindeer" to the thick, bushy-bearded Benn elicited laughs from the sellout crowd, the Dallas defenceman silenced those in attendance — and snapped a 33-game goal drought — when his wrist shot from the blue line beat Devan Dubnyk on the stick side with 5 minutes to play in the period.

Fiddler added a power-play goal off a double deflection to tie it 2-all with 90 seconds left in the period, and Seguin converted Spurgeon's defensive-zone turnover into a goal a minute later, taking a pass from Patrick Sharp and beating Dubnyk between the pads.

Roussel added an insurance goal early in the third, swatting in a rebound of a shot by Johnny Oduya to make it 4-2.

It was needed because Niederreiter poked home a rebound of his own shot midway through the final period for his first goal in 16 games to get Minnesota within one.

Eakin added an empty-net goal with 1:53 to play and Fiddler added another in the final 15 seconds as Dallas improved to 12-3-2 on the road.

Spurgeon, who signed a four-year, $20.75 million contract extension earlier in the day, gave the Wild a 1-0 lead nearly 5 minutes into the game when his wrist shot from the right circle snuck in between Lehtonen's left shoulder and the top corner of the net.

Barely 3 minutes later, Coyle's shot from the left circle beat Lehtonen on the glove side to make it 2-0.

Lehtonen, who entered with a 7-0-0 record and 2.00 goals-against average in road starts, was replaced by Niemi after stopping just two of four shots.

"I think our sense of urgency kind of dropped and we stopped going as hard for pucks, and winning those loose-puck battles and what we were doing before to make us successful," Coyle said.

NOTES: Dallas won the two previous meetings in overtime this season. ... Wild C Mikko Koivu was chosen the NHL's No. 3 star for the week that ended Sunday. Minnesota's captain had three goals and five assists in three games. ... Despite playing at home, Minnesota wore its white road sweaters and Dallas wore its home green.