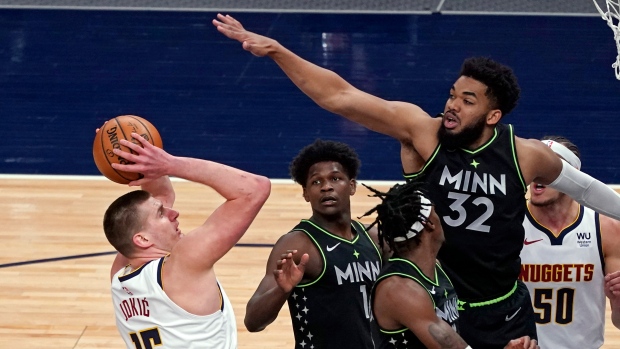 MINNEAPOLIS (AP) — Nikola Jokic scored 16 of his 31 points in the first quarter as the Denver Nuggets took control and the playoff-bound Nuggets held off a second-half rally in a 114-103 victory over the Minnesota Timberwolves on Wednesday night.

JaVale McGee had 12 points and 13 rebounds, and Vlatko Cancar scored a career-high 14 points off the bench for Denver. The Nuggets rested Michael Porter Jr. after clinching home-court advantage in the first round with their 117-112 victory at Charlotte in their previous game.

Denver sits No. 4 in the Western Conference, a game behind the Los Angeles Clippers for third.

Anthony Edwards scored 18 of his 29 points in the third as Minnesota made its run. Karl-Anthony Towns added 20 points and 11 rebounds, and D’Angelo Russell had 17 points.

Denver used its size with Jokic and McGee to assume a 13-point lead in the first half. The Nuggets scored their first 20 points in the paint, a streak snapped by an Aaron Gordon 3-pointer. They finished with X points inside the paint for the game.

Jokic was doing much of the offensive work. He had 12 of Denver’s first 14 points.

Edwards, the Timberwolves’ contender for rookie of the year, then took over in the third quarter. Minnesota kept putting the ball in the rookie’s hands and he repeatedly drove to the basket. With an 8-0 run, the Wolves closed to 92-89 to end the third, but they wouldn’t get any closer.

Nuggets: Monte Morris was held out for injury management. He made his return on Tuesday after missing 12 games with a right hamstring strain. … Coach Mike Malone said he doesn’t expect Will Barton (right hamstring strain) or PJ Dozier (right adductor strain) to return before the end of the season. Malone said Barton, who missed his 11th straight game, is closer to a return than Dozier. Dozier has missed the past five games.

Timberwolves: Edwards passed Christian Laettner for the most games of 20-plus points in a rookie season in franchise history. Edwards has 34 such games this season. … Edwards’ 18 points in the third tied his season-high for a quarter. … Towns had his 32nd double-double of the season and extended his club record for consecutive games with a 3 to 83 straight games.

Nuggets: Finish a back-to-back on Friday in Detroit before ending the season at Portland.

Timberwolves: Host Boston on Saturday and Dallas on Sunday to end their season.