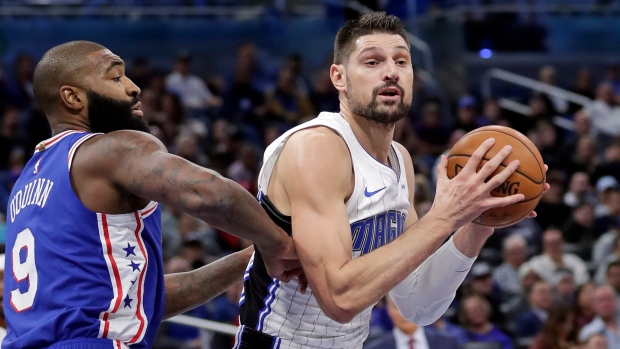 ORLANDO, Fla. — It took the Orlando Magic 10 3/4 games to find their offence.

Nikola Vucevic had 25 points and seven Orlando players scored in double figures as the Magic came up with a big fourth quarter and beat the Philadelphia 76ers 112-97 on Wednesday night.

"It was good to see the offence finally click, especially in the fourth quarter when you need it the most," said Vucevic, who had 12 of his points in the fourth. "Hopefully, we can play that way going forward and kick-start our offence a little bit."

The Magic won for just the second time in seven games. The Magic shot 13 for 24 in the fourth quarter. Meanwhile, the 76ers shot 6 for 19 with seven turnovers.

"They say play your best when your best is needed, and that was a good win. That was a good fourth quarter," Magic coach Steve Clifford said. "We made good plays at both ends of the floor."

Aaron Gordon had 18 points and 13 rebounds for the Magic, and D.J. Augustin had 12 points and eight assists off the bench. Augustin, who was moved out of the starting lineup six games ago, played the entire fourth quarter, in which the Magic outscored the 76ers 32-15.

The 76ers played without centre Joel Embiid, who has a sore left knee.

"It's easy to point to missed shots, but I feel like defensively we have to do more without Joel," 76ers coach Brett Brown said. "It takes far more of a collective everything. Sometimes you can make mistakes and you have 7-foot Joel Embiid putting out fires and covering things up. We didn't have that tonight."

Orlando made 11 of its first 16 shots, and led by eight points midway through the first quarter before losing their scoring touch.

A 3-pointer by Gordon at the halftime buzzer made it 53-all.

Two dunks by Simmons lifted the 76ers to an eight-point lead early in the second half while the Magic went more than 5 1/2 minutes without a field goal.

After a jump shot by Richardson put the 76ers up 84-80 early in the fourth quarter, Terrence Ross and Evan Fournier hit back-to-back 3-pointers and the Magic took control with an 18-3 run.

76ers: Embiid, who dunked in the final seconds of the 76ers' 98-97 win on Tuesday night, missed his fourth game of the season, including two due to a suspension. "Injury maintenance" was also listed as a reason. ... Simmons, who leads the NBA in steals, did not record a steal. ... Harris is 0 for 18 from behind the arc in the last five games.

Magic: Markelle Fultz, who replaced Augustin in the starting lineup, has yet to play 25 minutes as a starter and has averaged only 24.2 minutes in his five starts. "He gets fatigued. (His minutes will increase) little by little," explained coach Steve Clifford. ... The Magic held the 76ers to one free throw attempt in the first half after playing a game against Indiana in which neither team shot a free throw in the first half. ...After failing to score 100 points in any of their first seven games, the Magic have gone over 100 in four straight.

WHO NEEDS A JUMP SHOT?

Brown on Simmons, whose nine field goals included six layups and three dunks: "His jump shot, his 3-point shot, it gets so beaten up. But to me, the way he can impact the game the most, the quickest and the easiest is defensively. He's a 6-foot-10 thoroughbred. I think the league should take notice of him as a legitimate all-league defensive player."