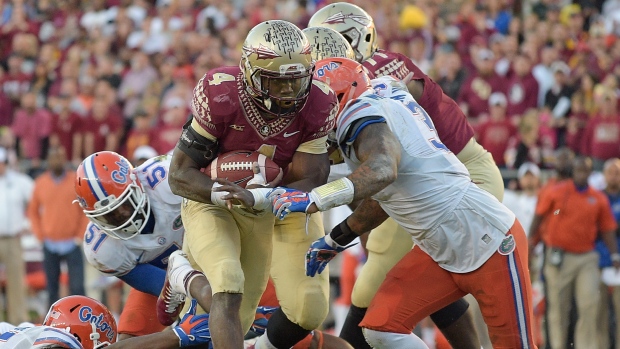 TALLAHASSEE, Fla. -- Dalvin Cook ran for a career-high 144 yards and No. 1 Florida State survived Jameis Winston's struggles to beat Florida 24-19 on Saturday night in Will Muschamp's final game as the Gators' coach.

The defending national champion Seminoles have won 28 games in a row, and completed consecutive undefeated regular seasons for the first time in school history. Florida State is the 16th team to accomplish the feat since 1950.

The Seminoles (12-0, No. 3 CFP) will face Georgia Tech in the Atlantic Coast Conference championship game Dec. 6.

Winston threw a career-high four interceptions, including three in the first quarter. He finished 12 of 24 for 125 yards and two touchdowns. Tight end Nick O'Leary had two second-quarter touchdown catches to give Florida State a 21-9 lead.

The Gators (6-5) jumped out to a 9-0, but the offence struggled. Treon Harris threw for 169 yards with a touchdown and two interceptions. Florida's Austin Harder missed two second-half field goals that would have given the Gators the lead.