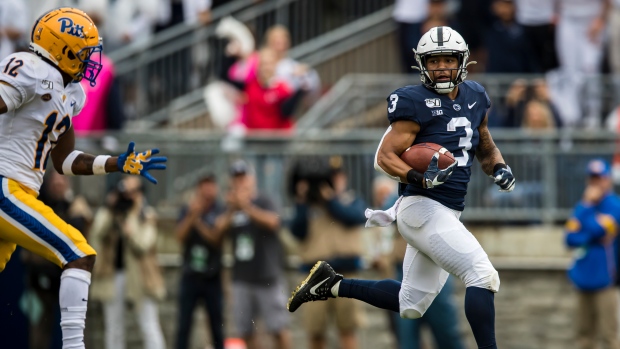 UNIVERSITY PARK, Pa. — Pittsburgh head coach Pat Narduzzi joked before the 100th meeting between the Panthers and 13th-ranked Penn State that the next time the rivals face off, he’ll either be retired or “in a coffin.”

That’s a long time to live with some curious decision-making that helped the Nittany Lions escape with a 17-10 win.

Pitt opted to kick a field goal on fourth-and-goal at the Penn State 1 trailing by a touchdown with less than 4 minutes to go. Alex Kessman’s 19-yard attempt clanked off the upright and the Nittany Lion defense later turned away Pitt’s last-ditch possession to win their third straight in the series since it was renewed in 2016.

Journey Brown ran for 109 yards and a touchdown for Penn State (3-0) and Noah Cain’s 13-yard third-quarter sprint to the end zone gave Penn State the lead for good. Sean Clifford completed 14 of 30 passes for 222 yards while spending most of the afternoon under heavy duress.

Pitt’s Kenny Pickett threw for a career-high 372 yards, but Penn State held firm when it mattered. The Panthers had first-and-goal at the Penn State 1 midway through the fourth quarter. Two passes and a run went nowhere, and Narduzzi opted to kick, despite trailing by seven.

Kessman’s miss allowed the Nittany Lions to bleed the clock a bit. Pitt drove from its 16 to the Penn State 26 in the final seconds, but Pickett’s 51st and final pass attempt smacked off a sea of hands in the end zone and fell incomplete to let Penn State improve to 53-43-4 in the series.

A rivalry that dates back to 1893 is going on indefinite hiatus. The uncertain future provided a sense of finality, one Narduzzi didn’t run from. He stressed to his players the outcome will give the winner bragging rights for years and possibly forever.

While Pitt fought gamely — overcoming a slow start following a 30-minute weather delay to take a 10-7 lead — the Panthers allowed Penn State to get into a rhythm late in the first half. Jordan Stout’s school-record 57-yard field goal tied it at 10 going into the break.

Using the no huddle to help slow the Panther defense, Clifford led Penn State 88 yards in 13 plays, the last Cain’s burst up the middle that put Penn State in front to stay.

Pitt: Five seasons into his tenure, the swaggering, aggressive defensive style Narduzzi cultivated during his long run as an assistant at Michigan State has finally become a part of the culture at Pitt. The secondary may be the best in the Atlantic Coast Conference and the defensive line looks capable even with starters Rashad Weaver and Keyshon Camp both done for the season with knee injuries.

Penn State: Things didn’t come quite so easily for the Nittany Lions after a pair of blowouts to open the season. Yet Clifford proved his toughness while taking a pounding and — just as importantly — took care of the ball.