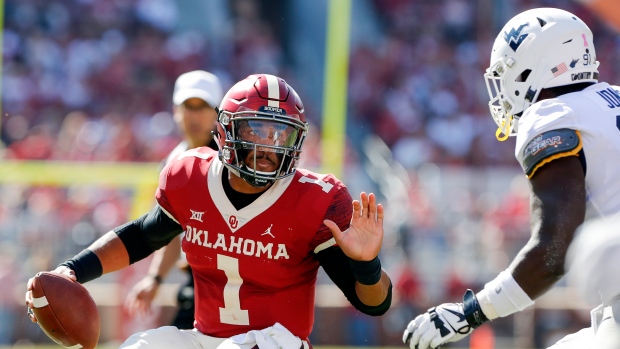 NORMAN, Okla. — Jalen Hurts passed for 316 yards and three touchdowns and rushed for 75 yards and two more scores as No. 5 Oklahoma cruised to a 52-14 victory over West Virginia on Saturday.

The Sooners, who rolled up 560 yards of offense, has scored at least 34 points in 17 straight games, the second-longest such streak in the FBS since 1980. The Sooners didn't score a touchdown in the fourth quarter, though; they've now scored a touchdown in every quarter but two this season.

West Virginia quarterback Austin Kendall, who spent three seasons at Oklahoma as a backup to Baker Mayfield and Kyler Murray before transferring, completed 15 of 31 passes for 182 yards, including touchdowns of 38 and 7 yards to T.J. Simmons.

Hurts, whose transfer from Alabama to Oklahoma led to Kendall's transfer, completed 16 of 17 passes, with the incompletion a drop by freshman Drake Stoops. Hurts entered the game averaging 398 yards of offense per game, a number that won't drop much after his 391-yard performance against the Mountaineers.

Oklahoma punted on its first possession but scored touchdowns on its next four -- a 20-yard pass to Jeremiah Hall, a 6-yard pass to Charleston Rambo, a 9-yard run by Kennedy Brooks and a 2-yard run by Hurts.

The Mountaineers were within 28-14 at halftime, but Oklahoma scored three touchdowns in the third quarter, the first on a 22-yard run by Hurts and the second on a 46-yard pass to Lee Morris. Brayden Willis then blocked a punt in the end zone that Oklahoma's Austin Stogner recovered to extend the Sooners' lead to 49-14. It was the first time that happened to West Virginia since the 2003 season and the third time since the start of last season that Oklahoma had a punt block result in a touchdown.

Oklahoma: The Sooners' offense continued to roll behind Hurts, and the defense mostly held its own, holding the Mountaineers to 51 rushing yards and 242 yards of offense. Those are two things Oklahoma will need to continue to happen to stay in the mix for a spot in the College Football Playoff.

Oklahoma had its fourth consecutive 11 a.m. kickoff Saturday and is scheduled for another next week at Kansas State. That didn't sit well with a segment of Oklahoma fans, which athletic director Joe Castiglione acknowledged in a pair of tweets sent before the game.

Former Oklahoma running back Steve Owens, the 1969 Heisman Trophy winner, was recognized during a halftime ceremony. Owens, who is from Miami, Oklahoma, received a 50th anniversary plaque from Rob Whalen, executive director of the Heisman Trophy Trust. Owens is one of Oklahoma's seven Heisman winners.

Oklahoma maintained its perfect record, but whether that allows the Sooners to hold their position in the AP Top 25 or move up has largely depended this season on what happens elsewhere in the nation.

West Virginia: After an off week, will visit Baylor on Oct. 31.