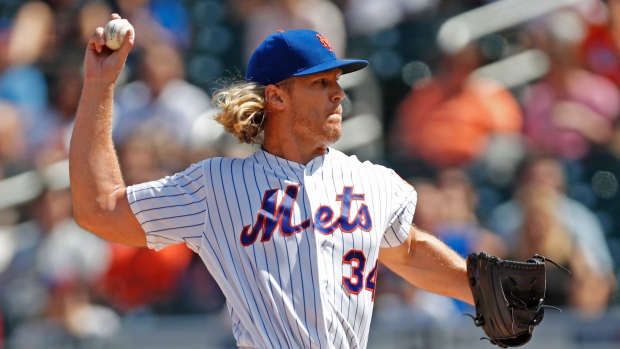 NEW YORK — Mets starter Noah Syndergaard said Tuesday it was "unfortunate" his complaints to New York's front office and coaching staff about catcher Wilson Ramos were made public and he denied any role in leaking the conversations.

The New York Post reported on Syndergaard's frustrations Monday, saying the right-hander or his agents have implored the Mets numerous times to let Syndergaard pitch to another catcher.

Syndergaard said he was surprised by the report, and manager Mickey Callaway said he believes Syndergaard was not the one who disclosed their talks to the Post.

"It is unfortunate that a private conversation I had with the front office and the coaching staff became public, but it is what it is," Syndergaard said.

The right-hander said it is "completely false" that he was livid in conversations with club officials, calling discussions "very cordial and adult." He also said he has "nothing but respect" for Ramos.

"I know in terms of pitchers and catchers, there's a certain it-factor, a relationship, a symbiotic relationship that two guys can possess," Syndergaard said. "It's all about being comfortable out there."

Callaway said he has not decided who will catch Syndergaard's next start, likely Friday against the Los Angeles Dodgers, but maintained "we're always going to try to do what's best for the team." He pointed to the team's results — the Mets are 9-6 when Syndergaard pitches to Ramos and 6-4 when he's paired with Nido.

"It depends on what numbers you look at," Callaway said.

Syndergaard said he has not said "anything major" to Ramos about the report or his frustrations.

Syndergaard agreed "completely" his preference for Nido or Rene Rivera is similar to deGrom's with Mesoraco.

"Watching what those two did last year was like watching Bob Ross paint," Syndergaard said. "Everything was calculated and it was artful."

Manager Mickey Callaway said this year's situation differs because the club is competing. New York began the night four games behind the Chicago Cubs for the second NL wild card.

"It's different because Jake had a one-something ERA and was fighting for a Cy Young," Callaway said. "Where we're at as a team is much, much different."

This is the latest public frustration between the hard-throwing Syndergaard and the Mets. He's expressed disappointment over being mentioned in trade rumours, and also complained this spring when the club travelled to Syracuse for a public workout days before the regular season opener.

Syndergaard is eligible for free agency after the 2021 season. Asked about his relationship with the front office, Syndergaard said "as of right now, the 25, 40 guys in the clubhouse, that's my family." When pressed, he added that he respects the front office and is "appreciative of the open dialogue."

"I'll admit I can be stubborn at times, but it's just for I want the best for the team," he said. "I want to go out there and compete at the elite level that I think I can compete at. But yeah, I would say I'm welcome and wanted here."