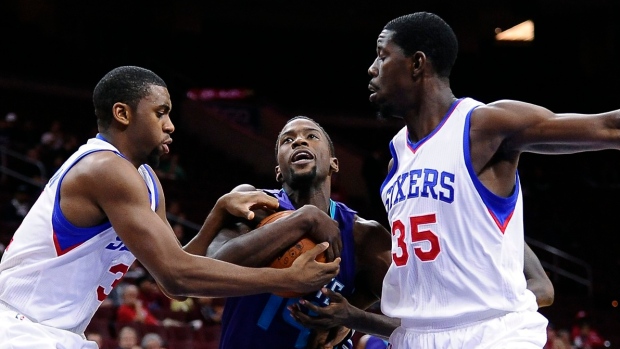 PHILADELPHIA - Nerlens Noel had 10 points, nine rebounds and three blocked shots in his first home game with the Philadelphia 76ers, who beat the Charlotte Hornets 106-92 in a preseason matchup on Wednesday night.

Noel was acquired in a 2013 draft night trade with New Orleans for All-Star point guard Jrue Holiday. He played 31 minutes in his second game after he missed last season with a torn ACL.

Gary Neal led the Hornets with 14 points in their first preseason game. Lance Stephenson and Kemba Walker each had 13, and Michael Kidd-Gilchrist scored 11.

There was quite a bit of sloppy play, but Ware dazzled the sparse crowd with a 65-footer at the third-quarter buzzer, giving the Sixers an 84-68 lead.

Both teams were missing key players. Charlotte held out guard Gerald Henderson with a right hamstring strain, and Sixers guard Michael Carter-Williams, the reigning NBA Rookie of the Year, sat out with soreness in his surgically repaired right shoulder.

Sixers forward Hollis Thompson left in the first quarter with a corneal abrasion in his left eye.

Brandon Davies had 13 points for the Sixers, who lost 98-78 at Boston in their preseason opener on Monday night. Elliot Williams scored 12 points, and Alexey Shved finished with 11.