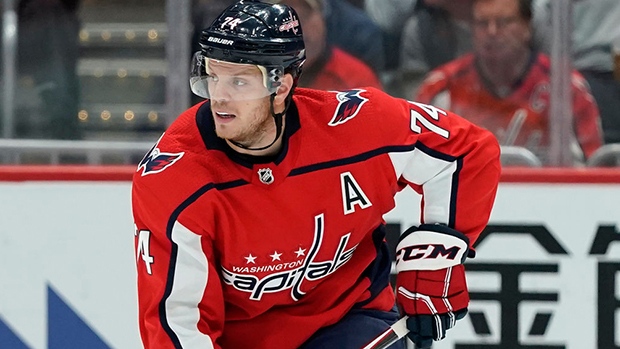 To Ovechkin, it might as well be the John Norris Memorial Trophy, as in Washington Capitals teammate John Carlson.

Ovechkin has started a hashtag, #Johnny4Norris, in his campaign for Carlson – even though voting is six months away. Carlson can match Al MacInnis’ record of 25 points by a defenceman in October from 1990-91 with a four-point night on Tuesday against the Maple Leafs (7 p.m. ET on TSN4).​

Carlson appreciates the support from his captain. He just doesn’t love all of the Norris noise. That’s not his style.

“I want to win because I deserve to win, not because my teammates are shouting my name out in interviews,” Carlson said in a phone interview on Monday.

Carlson, 29, has made his case in the first month of the season. With five goals and 21 points in the Capitals’ first 13 games, Carlson became the first defenceman since Brian Leetch in 1991-92 to lead the league outright in points after 10 games played.

He has as many primary points (14) as Paul Coffey did total points in his best-ever October, and his 18 points through his first 10 games put him in the same breath as Bobby Orr in 1969-70.

Maybe this isn’t all that different than what we’ve seen in the recent past, just amplified. Carlson led all defencemen in scoring on Washington’s run to the Stanley Cup in 2017-18. He finished fourth in defensive scoring last year with 70 points. He’s eight points clear of the next closest blueliner (Roman Josi) so far this month.

That is a significant chunk of time at the top, solidifying his place among the elite. His play in the defensive zone and awareness has rarely been criticized.

So, why hasn’t Carlson been given more consideration for the Norris?

Carlson finished fourth in voting by the Professional Hockey Writers Association last season, narrowly missing out on becoming a finalist for the first time in his career. (Full disclosure: this voter had Carlson fourth on his Norris ballot.)

“I think there’s a combination of reasons why I haven’t won,” Carlson said. “For one, I could’ve played better. Two, I don’t like to draw attention to myself. The voting isn’t something I think about – it’s not on my agenda. I think at the end of the day I can only control getting better on the ice, and that’s all I think about.”

The interesting thing about Carlson’s start is that while his shooting percentage (17.9 per cent) may not be sustainable, his point production may not realize a considerable drop. Carlson collected 32 and 33 points on the power play the last two seasons, accounting for about 47 per cent of his points. So far this year, only seven of his 21 points (33 per cent) have come on the man advantage.

Carlson is actually shooting less frequently to start this season than his career averages. He’s on pace to put about 25 fewer pucks on net this season.

He didn’t even know.

“That number isn’t really something I would be looking at,” Carlson said. “We’re always looking at shot quality, getting the puck into a good scoring chance rather than just shooting it. Sure, there are some teams – execution-based teams – where I will need to shoot more from the top, but we’re always looking for the best quality shot.”

Carlson said the Capitals have tweaked their style this season under coach Todd Reirden, who helped develop Carlson during his years as Washington’s defensive assistant. Carlson said the Caps’ defence is “more aggressive,” particularly pinching along the wall than in years’ past, and their entire unit is up in the rush now.

“We attack,” Carlson said. “We’re scoring more goals. It’s as aggressive as I can remember.”

This start and all of the Norris chatter that comes with it – the incessant interview and podcast requests – has all been a little exhausting.

But what you learn when you watch Carlson – the puck poise, the deft shot-pass fake to Ovechkin or the subtle shimmy for some power-play deception – is the same as what you get when you talk to him. You realize he is just comfortable, on the ice and in his own skin.

Carlson hasn’t changed. We’re just changing how we view him.

“There is a comfort that comes with playing with so many of these guys for so long, I know all of their tendencies,” Carlson said. “I mean, things are just going really well right now. It’s just a great start.”