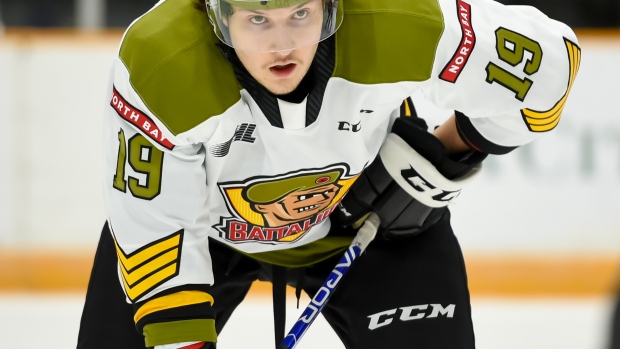 NORTH BAY, Ont. — The North Bay Battalion finished second in the Ontario Hockey League's Eastern Conference this season with 93 points, but more importantly won eight of their final 10 games heading into the playoffs.

After sweeping the Ottawa 67's in the opening round, best-of-seven playoff series, the Battalion made life tough on the Kingston Frontenacs, wrapping up their series in five games with an exciting 6-5 win Saturday night in North Bay.

Kyle McDonald and Kyle Jackson each scored twice for the Battalion, while Paul Christopoulos and Michael Podolioukh chipped in singles.

Martin Chromiak scored twice for the Frontenacs who trailed 3-0 after the first period and 5-1 entering the final frame. Jordan Frasca, Lucas Edmonds and Shane Wright also had goals for Kingston. The Frontenacs outshot the Battalion 35-20.

North Bay will face Hamilton in the next round. The Bulldogs swept their second-round series against the Mississauga Steelheads.

Elsewhere, the host Flint Firebirds ended the Soo Greyhounds playoff season with a 7-1 victory to win their series 4-1.

And despite a valiant effort from the Kitchener Rangers to stay alive in Windsor, the Spitfires' Andrew Perrott scored midway through the third period to give his squad a 3-2 win and 4-1 series victory.

Louka Henault and Michael Renwick also scored for Windsor, while Matthew Sop and Ty Hollett had goals for Kitchener.

This report by The Canadian Press was first published May 14, 2022.