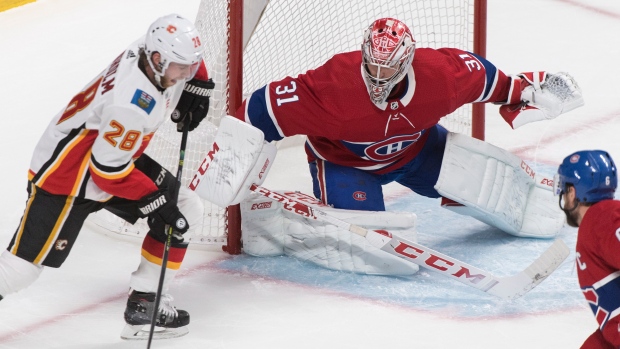 The late, great John Muckler made famous a motto during his time with the Ottawa Senators: “You can’t win the Stanley Cup if you don’t talk about it.”

So let’s talk about it, Canada. The drought is approaching 28 years since the Montreal Canadiens last brought Lord Stanley home in 1993.

The NHL’s juicy, one-off all-Canadian North Division has the country clamouring: Is this the year?

That’s what training camp brings – some much-needed hope. But it’s not wild to dream this year, because the season’s unique pandemic-dictated format would seem to give Canada a leg up.

One victor will emerge as King of the North and that crown comes with a guaranteed ticket to the Stanley Cup semifinals via exclusive intradivision play through the first two rounds of the playoffs.

In other words, assuming that all of the surviving teams are of equal strength, Canada is guaranteed a 25 per cent shot at the Stanley Cup.

Sure, those odds are a bit better than in any ‘normal’ NHL season. The math is a bit complicated and messy, so I’ll leave it to analyst Micah Blake McCurdy of HockeyViz.com fame, who computes that a Canadian team typically has a 22 per cent chance to get to the Conference Final.

Only three Canadian teams have gotten to the Conference Final in the past seven seasons. The Winnipeg Jets were the last Canadian club to make it that far, bowing out to the Vegas Golden Knights in five games in 2018. The Ottawa Senators lost to Sidney Crosby and the Pittsburgh Penguins in double overtime in Game 7 of the East Final the year prior; the Montreal Canadiens fell to the New York Rangers in 2014.

But push aside the odds and the anecdotal evidence for one second. This format could be viewed as both a blessing and a curse.

You could make the argument that Canada is getting shortchanged by this format for this one season in particular. By guaranteeing that one Canadian team will win at least two rounds, that also means that the other six will be eliminated before then.

Pick another random moment in time over the past two or three decades and that notion would be met with a shrug.

Now, we are smack in the middle of a Golden Age of Canadian hockey in the NHL.

In the NHL’s Sun Belt era, it tends to come around every 15 years or so. The last Golden Age - the only other one since the late 80s - was sandwiched around the season-long lockout in 2004-05. Canada had a representative in the Stanley Cup Final in three straight seasons in 2004 (Flames), 2006 (Oilers) and 2007 (Senators).

As exciting as that stretch was in those markets – Toronto included with a trip to the East Final in 2002 – the success during that run wasn’t spread across the country.

And Canada certainly didn’t have the embarrassment of riches in young superstars then who currently call the North home – from Connor McDavid and Leon Draisaitl to Auston Matthews and Elias Pettersson. They are the fruits of Canada’s Lotto 7, back when all seven clubs missed the playoffs in 2016, the only time that’s happened since 1969-70.

There is the NHL’s best shift disturber in Matthew Tkachuk, the heartbeat of the Flames, who will square off against younger brother Brady and the Ottawa Senators in nine appointment television matchups – including five times in a 10-day stretch in late February.

The upstart Canucks were one game away from the Conference Final last year. Montreal might have improved more than any team in the league over the off-season. The suddenly pesky Sens have put a stake in the ground, ready to be a thorn in the side of every Canadian fan base – and they just might be with 11 sets of back-to-back games with their young legs.

Given the depth and quality of the division, it will be arguably the toughest one to correctly predict the order of finish for this 56-game sprint.

Last year, six Canadian clubs qualified for the 24-team Stanley Cup playoffs. It wouldn’t be a stretch to think that six of Canada’s teams would qualify this season in a normally aligned 16-team format. Could two have advanced to the NHL's final four? It's possible, but it hasn't happened since 1994 (Canucks vs. Leafs).

But that’s what is going to make this once-in-a-century, Original Six, old-school style season so compelling.

The blessing is that one Canadian team is guaranteed to make it through to the semifinals. The curse is that only four will make the playoffs, leaving at least two clubs cursing about what could have been if not for COVID-19.