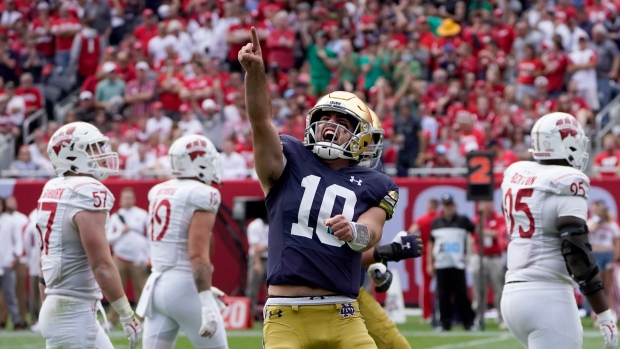 CHICAGO (AP) — Chris Tyree returned a kickoff 96 yards for a touchdown and Drew Pyne threw a touchdown pass in the fourth quarter in relief of an injured Jack Coan, helping No. 12 Notre Dame beat No. 18 Wisconsin 41-13 on Saturday at Soldier Field.

Brian Kelly became the winningest coach in Notre Dame history with victory No. 105, surpassing Knute Rockne in his 12th season with the Irish (4-0).

Graham Mertz threw four interceptions for Wisconsin (1-2), including two that were returned for touchdowns in the final 2:30 to blow the game open.

Coan, a Wisconsin transfer, left with an apparent left leg injury in the third quarter with the game tied at 10.

Coan played 22 games for Wisconsin over three seasons and was the starter for the 2019 team that reached the Big Ten championship game. He broke his foot in the runup to the abbreviated Big Ten season last year and Mertz claimed the starting job.

NASHVILLE, Tenn. (AP) — JT Daniels threw for 121 yards and two touchdowns while playing only the first quarter as Georgia posted its biggest win in a series that started in 1893.

The game was effectively over when Georgia (4-0, 2-0 Southeastern Conference) led 35-0 after the first quarter. The Bulldogs started three of four drives in Vandy territory. They recovered a fumble on a kickoff to set up one TD, then Christopher Smith intercepted a pass to set up a second TD less than 30 seconds later.

Vanderbilt (1-3, 0-1) lost its 14th straight SEC game, a skid that could be longer if COVID issues hadn’t forced Vandy to cancel its visit on Georgia’s Senior Day last season.

Clifford completed 19 of 26 passes, finding Parker Washington for two TDs and Jahan Dotson and KeAndre Lambert-Smith for one apiece. Tyler Warren rushed for a touchdown and Jordan Stout kicked a field goal for the Nittany Lions (4-0), who led 17-3 at the break in their eighth straight win.

Daniel Smith threw 57- and 17-yard touchdown passes to Rayjoun Pringle in the fourth for the Wildcats (3-1).

Playing behind an offensive line that has used four left tackles so far this season, Coan completed 15 of 29 passes for 158 yards and a touchdown. He was sacked five times.

He limped off the field, favoring his left leg, midway through the third quarter and went to the injury tent, and then the locker room.

CONWAY, S.C. (AP) — Grayson McCall threw for two touchdowns and ran for a third as the Chanticleers sent UMass to its 15th straight loss.

The Chanticleers, who scored on eight of nine possessions, have started 4-0 for the second straight season and have won 15 of 16 games over two years.

McCall opened the scoring with a 3-yard TD run and added scoring passes of 25 yards to Isaiah Likely and a 23 yards to Javion Heiligh.