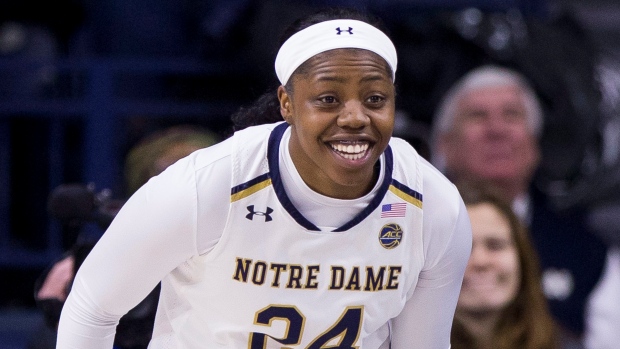 SOUTH BEND, Ind. -- Arike Ogunbowale scored 23 points and teammate Jessica Shepard had a double-double as No. 3 Notre Dame, the No. 1 seed in the Chicago Region, began defence of its NCAA championship with a 92-50 victory over No. 16-seed Bethune-Cookman on Saturday.

Brianna Turner, a 6-foot-3 forward who sat out last season's NCAA run with an ACL injury, just missed a double-double by one rebound, finishing with 19 points on 8-of-10 shooting, nine rebounds and five blocks. Jackie Young added 11 points. Sophomore reserve Mikayla Vaughn, who also sat out last season's championship run with an ACL injury, had nine points and 11 rebounds for Notre Dame, which won the board battle 48-28.

Angel Golden had 25 points for coach Vanessa Blair-Lewis' Lady Wildcats (21-11), who won the Mid-Eastern Athletic Conference Tournament and were playing in their first NCAA tournament ever.

The Irish used their 39th run of 10 points or better - 25-0, their longest spurt of the season - to take control of the game midway through the first quarter on way to a 51-19 halftime lead.

Bethune-Cookman, which left 80-degree temperatures behind in their Daytona Beach, Florida home, was cold for nearly nine minutes as Notre Dame increased a 29-12 first-quarter lead to 47-12 on Young's drive to the basket with 3:15 left. McGraw was able to rest her starters for much of the second quarter as Shepard scored 12 points and had 10 rebounds, Ogunbowale had 14 points and Turner had 11 points with four rebounds and four blocks.

Golden had 11 points on 4-of-13 shooting, including 3-of-11 from beyond the arc, to lead the Lady Wildcats. The last 3-pointer broke Notre Dame's shutout effort with 2:49 to play in the second quarter

The Irish then used a 9-0 run near the end of the third quarter, fueled by Ogunbowale, Shepard and reserve Mikayla Vaughn, to increase the lead to 40 points before settling for a 74-35 lead entering the final quarter.

Notre Dame: The Fighting Irish once again showed off their transition game, outrebounding Bethune-Cookman 29-11 and outscoring the Lady Wildcats 30-6 in the paint thanks to 14 assists on 20 field goals.