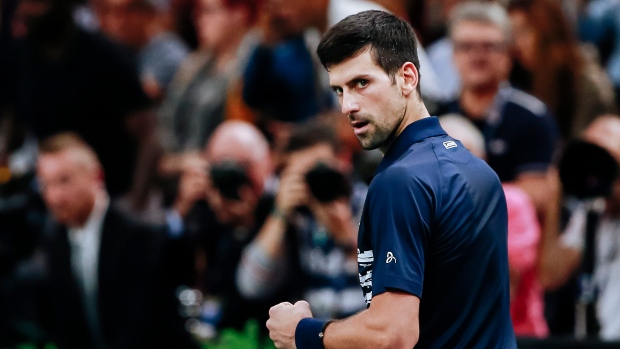 MADRID — Canada won the decisive doubles match to beat Australia 2-1 and reach the semifinals of the Davis Cup Finals on Thursday.

Vasek Pospisil and Denis Shapovalov defeated John Peters and Jordan Thompson 6-4, 6-4 to give Canada its first Davis Cup win against the Aussies.

Nick Kyrgios surprisingly did not play for Australia, being left with a cheering role. It was unclear whether he was injured of if it was a tactical decision by captain Lleyton Hewitt.

The 30th-ranked Kyrgios had won both of his matches in the group stage without dropping a set. He was substituted by the 48th-ranked John Millman, who hadn’t played previously in Madrid.

Shapovalov and De Miñaur had previously met in the 2015 junior Davis Cup final and in the 2016 Wimbledon boys final.

Canada had not beaten Australia in nine previous Davis Cup meetings, with only one match victory.

Earlier this week, the Canadians ended a losing streak of 15 meetings against the United States, a team it had never beaten in the Davis Cup.

Canada will next face either Serbia or Russia, who play their quarterfinal on Friday morning.

Novak Djokovic earlier helped Serbia eliminate top-ranked France, while Britain advanced despite resting Andy Murray to set up a meeting with Germany. Argentina went through as a second-place finisher to take on Rafael Nadal and host Spain.

Djokovic had a break in the first set and two in the second to clinch his 14th straight Davis Cup singles victory.

“I made some crucial breaks at the right time in both sets,” Djokovic said. “It’s tough to play Benoit, he is a very talented guy, very unpredictable.”

Serbia secured first place in Group A by winning every tie without dropping a set in the singles matches.

Group winners advanced to the knockout stage along with the two best second-place finishers among the six groups.

Argentina was one of those top second-place finishers, along with Russia. France, Belgium, Kazakhstan and the U.S. were eliminated as the other runners-up.

Britain got past Kazakhstan after Jamie Murray and Neal Skupski defeated Alexander Bublik and Mikhail Kukushkin 6-1, 6-4 in the deciding doubles match.

“It's been another good day for us,” Skupski said. “Very proud to get the win today with Jamie. I thought we fought hard. I think we’re playing well.”

Britain decided to rest Andy Murray, who on Wednesday came from behind to win his match against Tallon Griekspoor in three sets.

Germany won Group C by defeating Chile 2-1 thanks to a doubles win by Kevin Krawietz and Andreas Mies over Marcelo Tomas Barrios and Alejandro Tabilo.

“I think we’re really excited to be playing them in the quarterfinals,” Britain’s Jamie Murray said of the matchup against Germany. “I think it’s going to be a very evenly-matched tie and really excited to get the chance to go out there and compete again.”

The new Davis Cup Finals is being played in World Cup-style with all 18 teams playing in a single venue in the same week. The tournament overhaul is the result of a 25-year partnership between the International Tennis Federation and Kosmos, a group co-founded by Barcelona soccer player Gerard Piqué.