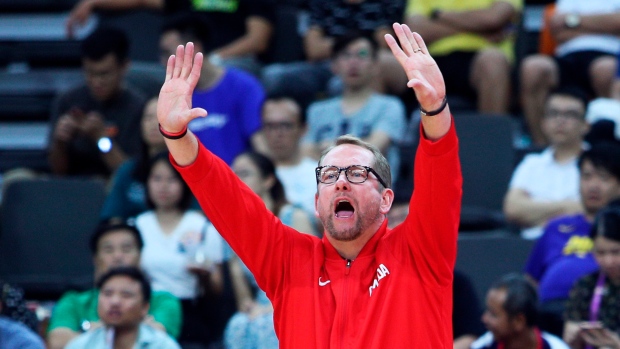 SHANGHAI — Nick Nurse is calling on Canada's best basketball players to commit to playing for their country. And showing up next summer isn't commitment enough.

Just six weeks into his stint as Canada's head coach, Nurse was asked Saturday what it would take to develop the same enviable cohesion that's developed over several years in countries like Serbia and Lithuania at the FIBA World Cup.

"I think the biggest thing is I think we need an introduction, some of the guys need an introduction to the national team, right? I think the guys who are here right now have all played a little bit, continue to grow as they stay together," Nurse said. "But some of the guys, I guess they need to find out why or why not they're going to play or commit to playing. If they're gonna play, it needs to be, like you said, a five or six-year stretch.

"Because I think you could do something special with a group of guys who stick together for five or six years."

Nurse knows Canada's tantalizing potential on the global stage is sky-high. He's watched as players like Jonas Valanciunas — for Lithuania — and Patty Mills and Joe Ingles for Australia — showed up for their countries, like they do every year.

The coach's strong words came on the heels of a 126-71 rout of Jordan in the classification round.

The fact Canada is in the World Cup's classification round and not playing for one of the seven Olympic berths on the line — or even battling for a place on the medal podium — says plenty about this undermanned team. Nurse said earlier in the tournament that when he was hired as head coach on the heels of leading the Toronto Raptors to their first NBA championship, he expected to be leading a team stocked with NBA players.

And why not? Canada boasts the second-highest number of NBA players behind the United States. There were 17 NBA players listed on Canada Basketball's initial training camp invitation list. A tiny portion of that showed up however, and Cory Joseph and Khem Birch are Nurse's only NBA players in China.

Combined with solid international players like Kevin Pangos and Melvin Ejim, who are both playing in China, it's easy to see how good Canada could be.

"I see it as a really interesting unique time in Canada Basketball," Nurse said. "The talent's really pouring out, the young talent continues to pour out, the Raptors had a pretty good season, the fan base, the people are interested all over the country in basketball, I think it's an important time for a group of six, eight, 10 guys to stick together for five or six years."

Canada is bursting with young talent, capturing the U19 world championship in 2017 — the country's first gold at the global level — and shining on both the NCAA and NBA stage.

Nurse praised the 28-year-old Joseph, who's played for Canada every summer since he was 15.

"I would say that Cory's obviously one of our most talented players, and he's been around for a long time, I think that's the combination we're looking for is the guys right at the top of their profession to commit to the national team like Cory's done," Nurse said of the Sacramento Kings guard. "The guy can really guard and defend some of the best players, and he can score buckets and especially buckets late in the shot clock and late in the game so the few things that he does, let alone play every year, but the way he plays and the abilities that he has are really important to our team."

Nurse, whose contract extends through the Olympics, will need everyone on board next summer if Canada is to play in Tokyo. If the Canadians can nab a spot in one of the four second-chance qualifying tournaments next June, they have to win that tournament. The Olympics is a 12-team tournament, and eight countries will have clinched spots after the World Cup.

Making matters worse, because Canada was relegated to the classification round in China, they'll go in with a low seed, so will likely get stuck in a tough group.

Kyle Wiltjer, who led Canada with 29 points on Saturday, including seven three-pointers, was asked what it will take to see the national program live up to its potential.

"It's building that cohesion, and even for myself as a player, I didn't really know what to expect because we brought in a new coach and with that comes a new system, and if we have to play next year guys like Cory, Khem, me, we know the system now, we feel comfortable in it," Wiltjer said.

"And it's just getting as many guys in the system to buy in to a long stretch and that part comes from us players getting everyone together, and then guys like (Joseph) are invaluable. Cory's played in NBA, international experience, so when you've got talent like that, it's really vital for our team's success."