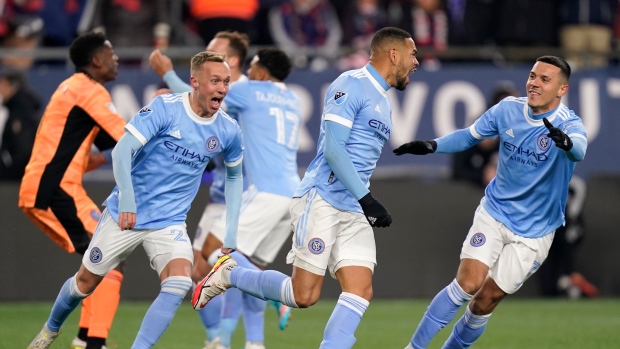 Alexander Callens scored on the final penalty shot for NYC, which will play the Philadelphia Union on Sunday for a spot in the MLS Cup.

Alfredo Morales, Thiago Andrade, Ismael Tajouri-Shradi, Maximiliano Moralez and Callens all converted from the penalty spot against Matt Turner, the MLS goalkeeper of the year.

Each team scored in the opening 10 minutes of the match but it remained that way until extra time.

Valentín Castellanos, the Golden Boot winner, gave NYC a 2-1 lead in the 109th minute with a header of Gudmundur Thórarinsson’s cross, and Canadian Tajon Buchanan tied it nine minutes later.

That was the New England swansong for Buchanan, runner-up to FC Dallas's Ricardo Pepi for MLS Young Player of the Year. The 22-year-old from Brampton, Ont., will now join Club Brugge in Belgium

New England was trying to become the eighth Supporters' Shield winner to win the MLS Cup.

Santiago Rodríguez opened the scoring for NYC in the third minute with his fourth goal of the season — and first since Sept. 9 against New England. The Revolution responded six minutes later when Buksa scored his 17th goal of the season by heading in Carles Gil's free kick.