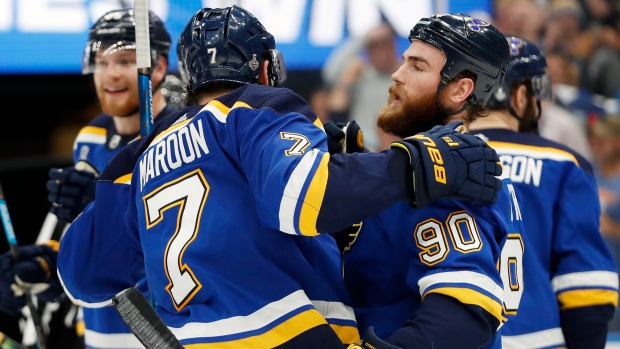 ST. LOUIS — On the night the West was won, Brett Hull said there were four reasons why the Blues booked their first ticket to the Stanley Cup Final in 49 years.

And the fourth, according to the Golden Brett, was Ryan O’Reilly.

“Ryan O’Reilly came in and has been the consummate professional from Day 1,” Hull said. “He taught Vladimir Tarasenko and every single player in that room how to play the right way.”

Remember when there was somehow some notion with his playoff-starved resume that you can’t win with O’Reilly? Yeah, the Sabres don’t either.

Last April, O’Reilly was torched in Buffalo when he accused the Sabres of “being OK with losing.” He spoke from the heart and admitted he “lost” his “love of the game multiple times throughout last season.”

Turns out, it’s definitely tougher to win without him. No one wanted it more on Monday.

O’Reilly was a one-man army, a relentless wrecking-ball who was both freak of nature and force of nature, as he saved the St. Louis Blues’ season.

O’Reilly scored 43 seconds into Game 4, netted the game-winner in a Stanley Cup Final series-pivoting period, and nearly willed a third behind Tuukka Rask on a shorthanded breakaway. It’s a best-of-three now for Lord Stanley as O’Reilly helped knot the series at two games apiece with a rousing, 4-2 win at Enterprise Centre.

“I thought he had a hell of a game tonight,” coach Craig Berube said. “It’s not even just the goals, it’s his approach the game. He was moving really well, he was strong on the puck, he was a factor in every facet of the game – power play, penalty kill, everything.”

It was a deliciously entertaining Game 4. There were juicy rebounds. There was a three-minute shift in which the Blues hemmed Connor Clifton and Charlie McAvoy in the Bruins’ zone with an all-out assault. Brad Marchand was even up to more Brad Marchand things, as he tapped Jordan Binnington’s pads on his way by during a stoppage, causing the rookie netminder to tumble to the ice.

Bruins captain Zdeno Chara took a puck in the face in the second period and returned to the bench with a full facial shield, but did not take a shift in the final frame.

Bruins sources indicated to TSN that Chara may have broken his jaw when Brayden Schenn’s shot rode up his stick, but coach Bruce Cassidy would say only that Chara was “advised not to return.” His status for Game 5 on Thursday night in Boston is unclear; the Bruins could be without both Chara and Matt Grzelcyk on the backend.

“Very uncomfortable. Probably some dental work in the near future,” Cassidy said. “He wanted to come out on the bench and be with his teammates, that’s why he was out there.”

If there was any question as to how the Blues would respond to a five-goal drubbing in Game 3, O’Reilly answered it early ­­– and often.

“Sometimes it’s a battle of will,” Cassidy said of O’Reilly. “Sometimes you tip your hat to a good player.”

Last summer’s trade may be one that Sabres GM Jason Botterill never lives down. O’Reilly was blunt and honest, but maybe he was exactly what Buffalo needed. Instead, the Sabres shipped him to St. Louis in exchange for Patrik Berglund, Vladimir Sobotka, Tage Thompson and first and second-round picks.

Blues GM Doug Armstrong said O’Reilly’s comments “gave me zero pause.” Ditto that he had only appeared in 13 playoff contests previously with Colorado, never won a round, and couldn't help the Sabres to the playoffs.

“He was speaking from the heart. He was frustrated. He wanted more from himself,” Armstrong said at the Cup Final’s Media Day. “When I talked to him on the phone, I could tell he was in the right frame of mind. I didn’t have to bring it up.”

In fact, Armstrong thought back to interviews at the 2009 NHL Draft Combine – when O’Reilly went in the second round, 33rd overall to Colorado – but he was a topic of conversation.

“We would say to players, who is the hardest guy to play against? His name kept coming up,” Armstrong said. “We should have drafted him.”

He came in this year and Berube said O’Reilly was “our best and most consistent player all year.” O’Reilly hit career-highs with goals (28) and points (77) and was probably the only player worth his salt in a tough first three months of the season.

“He has rubbed off on our team in a lot of ways with his work ethic,” Berube said.

O’Reilly’s habits are legendary. His teammates say there is nothing he does halfway.

“First one on the ice, last one off the ice,” Pat Maroon said.

“Then we all go to the Ryan O’Reilly Hockey School after practice,” Brayden Schenn said. “He’s got a lot of drills, whether it’s hand-eye or shooting. There’s a whole group of guys that work with him. He’s done it his whole career.”

So there was O’Reilly in Game 4, swatting an Alex Pietrangelo rebound into the net before the puck even touched the ice. It was probably a shot he practised thousands of times.

“That stuff pays off,” Berube said.

O’Reilly just shrugged, saying it was “kind of a great bounce,” pushing it aside with all of the narratives about one the NHL’s great gamers.