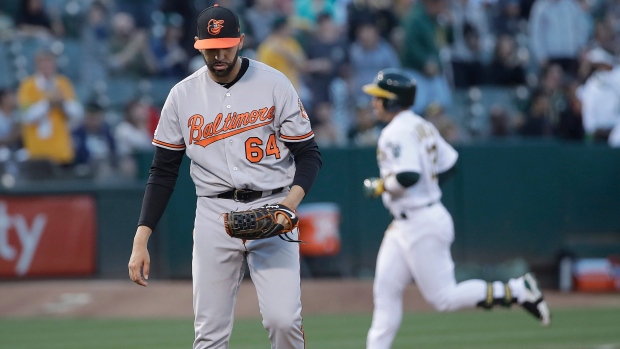 OAKLAND, Calif. — Brett Anderson might have been the only player in the home dugout who got tired of watching Oakland hit home runs in its 10-run sixth inning.

Even then, the Athletics' left-hander was only joking — sort of.

"This body gets cold in a hurry," Anderson said. "You like our team getting runs, but after a while you're like, 'Alright, that's enough. Let me get back out there before my body gets cold.' But run support is always good."

Khris Davis, Robbie Grossman and Stephen Piscotty homered in the sixth, and Oakland hit six home runs overall in a 16-2 rout of the Baltimore Orioles on Tuesday night.

Ramón Laureano, Chad Pinder and Beau Taylor also homered as the A's set a season-high for home runs. It's the first time that Oakland has had six home runs in a game since June 17, 2008.

"We have the ability to do that," manager Bob Melvin said. "We got some good counts, got some good swings. And on a night where, early on, it didn't look like the ball was really going anywhere, we ended up squaring a few up."

The A's beat the Orioles on Monday without hitting a home run — just the second time they've done that this season. They got six home runs Tuesday, including the first of Taylor's career. It was the only solo shot of the six.

Laureano hit a three-run drive in the fourth, then the A's sent 13 men to the plate during a 24-minute sixth inning.

"It just tells you how deep we are in the lineup," Laureano said. "One through nine, we can hit 20 or more. We know that. We just have to keep going, keep battling and keep pressing."

Anderson (7-4) allowed one earned run and four hits in seven innings in beating the Orioles for the second time this season. Anderson retired 13 of the first 14 batters he faced and carried a shutout into the fifth inning before Jonathan Villar homered with one out. The victory was Anderson's first since May 26.

"The first three innings I thought that was some of the best stuff I've had all year," Anderson said. "The middle innings, kind of tapered off, then got better toward the end."

Laureano finished with four hits and made a terrific running catch before crashing into the centre field wall. Matt Olson added two hits and scored twice. Pinder homered as a pinch-hitter in the seventh.

"It was hard to watch," Orioles manager Brandon Hyde said. "You have to get people out in the big leagues. There are nights when we do and nights when we don't. That's really difficult to watch. We've had way too many of those games."

WARMING WITH THE WEATHER

Laureano is batting .308 (44 for 143) since May 8, while his 11 home runs overall are the second-most by an AL centre fielder. "Just finding a good rhythm," Laureano said. "We're in summer now, so I feel better during the summer. I just have to keep it going."

Athletics: Nick Hundley will miss at least six weeks after undergoing arthroscopic surgery to repair a torn meniscus in his left knee. Hundley was already on the disabled list since June 8 due to back spasms. ... RHP Jharel Cotton has been playing catch but has yet to get back on a mound after undergoing hamstring surgery. Cotton had made three starts in the minors in his comeback from Tommy John surgery before injuring his hamstring. ... RHP Marco Estrada (lumbar strain) threw off flat ground before the game.

Oakland RHP Chris Bassitt (3-3, 3.68 ERA) starts the series finale Wednesday afternoon. Bassitt has one win in two starts against Baltimore. The Orioles plan to use RHP Jimmy Yacabonis (1-1, 5.40) as an opener, with Josh Rogers to follow.