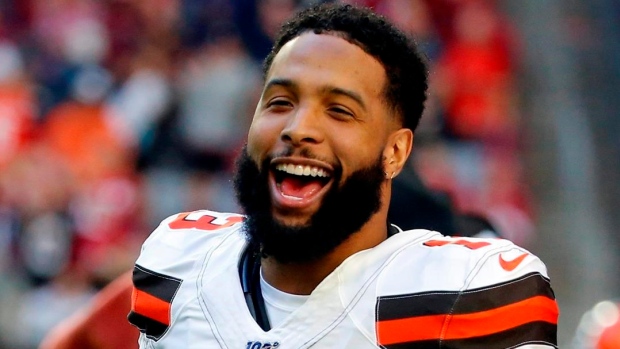 CLEVELAND — Odell Beckham Jr. practiced his own version of social distancing during his first off-season with the Browns. This year, the flashy receiver's been as close as possible.

Beckham, who skipped almost all of Cleveland's program last spring after being acquired in a trade from the New York Giants, has been a “model guy” during the team's virtual program necessitated by the COVID-19 pandemic.

According to new Browns offensive co-ordinator Alex Van Pelt, Beckham has been an active and willing participant in Zoom team meetings.

“He’s all in," Van Pelt said Wednesday on a conference call. "He’s bought in. He's been there and it’s awesome.”

Beckham did little to change his diva-like image last year in Cleveland. He chose to mostly stay off on his own — he attended just one of nine practices — and worked out alone while his new teammates took part in mini-camps and tried to build cohesion under former coach Freddie Kitchens.

Beckham's absence became a distraction and set the tone for a disappointing season as the Browns went 6-10 and extended a playoff drought dating to 2002 — the NFL's longest current dry spell.

Beckham didn't mesh with quarterback Baker Mayfield, and although he played in all 16 games and finished with 74 catches for 1,035 yards and four touchdowns, the speedy 27-year-old never provided the game-breaking plays the Browns had hoped to get.

This year, though, Beckham, who underwent surgery in January to repair a core muscle injury that affected him all last season, seems eager to put last season behind him.

Van Pelt had not previously worked with Beckham, but he's been excited about their first months together.

“It’s been great. I’ve known of Odell, obviously,” Van Pelt said. “Ben McAdoo (coached) Odell in New York and everything that Ben talked to me about with him I’ve seen. He’s a worker. He loves football. He's smart as hell. He’s just been a model guy this off-season.

“I can’t wait to get him in the building, get him on the field. He’s been outstanding.”