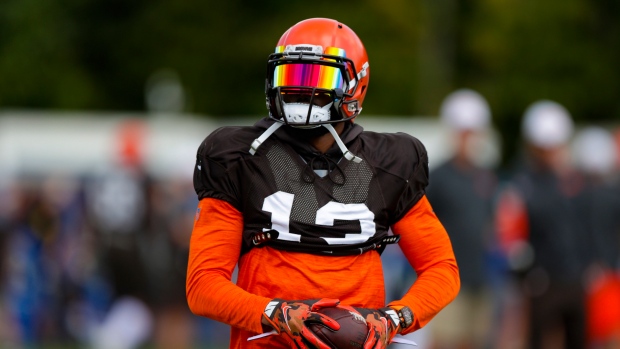 Star NFL wide receiver Odell Beckham Jr. believes the New York Giants tried to punish him by trading him to the Cleveland Browns in May.

“This wasn’t no business move,” Beckham told Sports Illustrated’s Ben Baskin in a profile published on Tuesday. “This was personal. They thought they’d send me here [Cleveland] to die.”

Beckham told Baskin that the Giants received better offers for the star receiver but still chose to send him to the Browns, who historically have been associated with ineptitude, out of spite. The former first-round pick achieved a ton of on-field success with the Giants, but also fielded his fair share of controversy during his tenure, as well.

"He laments, however, that coaches tended to feature him only on third downs, that the offence never schemed for his abilities, that he ran slants so frequently that defenders would call out his routes presnap,” Baskin wrote. “The Giants are 'stuck in an older mindset,' Beckham says. Then he clarifies: He's not trying to take 'shots—just speaking facts.'"

Even after the Giants made Beckham the highest-paid receiver in the NFL, he said he still thought the team would trade him.

“Beckham, deep down, had long believed the Giants would trade him,” Baskin wrote. “He says this explains why he never bought a house in the New York area. Then last October, five weeks after signing a five-year, $95 million extension that made him the highest-paid receiver in the league, he aired his frustrations to ESPN, leading to a fine from the team. He was convinced he was gone.”

If Beckham is eager to exact revenge against his old team, he’ll have to wait a while as the Browns and Giants are not scheduled to play one another during the 2019 regular season.