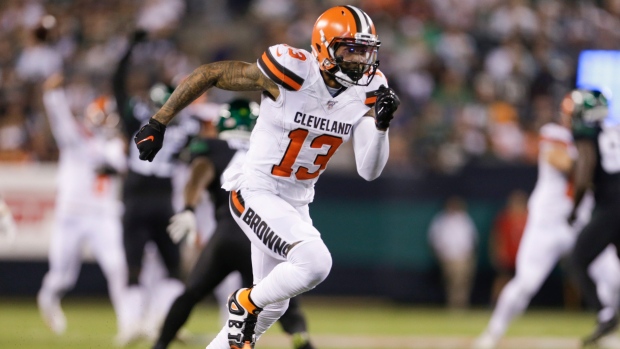 EAST RUTHERFORD, N.J. — Odell Beckham Jr. felt right at home again — in the end zone and on the highlight reels.

With an 89-yard touchdown catch and a spectacular one-handed grab in his return to MetLife Stadium, the Browns wide receiver helped lift Cleveland past the short-handed and banged-up New York Jets 23-3 on Monday night.

Beckham, traded from the Giants in March, helped the Browns (1-1) bounce back from a 30-point loss to Tennessee in their opener to top the Jets (0-2) and give Freddie Kitchens his first win as Cleveland's coach.

It all came after Beckham called out Jets defensive co-ordinator Gregg Williams last Thursday, saying the coach — then with the Browns — instructed players to hurt him in a preseason game in 2017. Williams denied Beckham's accusations and jokingly asked reporters: "Odell who?"

Williams, who led the Browns to a 5-3 record as their interim coach last season, also chided reporters for giving Beckham attention and wouldn't call him one of the NFL's most dynamic players.

"Everything fuels me," Beckham said. "Good comments, bad comments, I feel all of that. I just want to be the very best that I can and be the leader I am supposed to be."

Well, Williams clearly knows who Beckham is now. The coach was seen shouting angrily on the sideline after Beckham's touchdown.

"Who?" Beckham said when asked about Williams' comments. "No, everybody has the right to their own opinion. He's a phenomenal coach, he's got a great defence, but I'm done talking about it, you know? We won, so I just tried to make plays to help the team."

Beckham finished with six catches for 161 yards and the TD from Baker Mayfield, who couldn't believe Williams' comments.

"He said that? Jesus," the Browns quarterback said, shaking his head. "Next question. Not a dynamic football player? OK."

New York lost quarterback Trevor Siemian to an ankle injury in the second quarter, and Luke Falk — promoted from the practice squad earlier in the day — played the rest of the game. Siemian was starting in place of Sam Darnold, who's sidelined for at least a few weeks while recovering from mononucleosis.

"Yeah, it's been a weird week," Falk said. "A week ago, I was on the practice squad and then tonight I'm standing in front of you guys after playing in a game."

The Jets couldn't get anything going on offence, and the Browns blew open the game late in the third quarter.

Falk led the Jets on their longest drive of night to that point — 60 yards — but Le'Veon Bell could only get 1 yard on a fourth-and-2 pass, turning the ball over on downs at the Browns 11.

On the next play, Mayfield hit Beckham with a slant pass, and the receiver outran the Jets' defenders all the way to the end zone for an 89-yard TD that put Cleveland up 23-3 with 3:32 remaining in the third quarter.

"That did it and that was huge for us," said running back Nick Chubb, who had a 19-yard TD run. "We took all the momentum away from them with that long run. After that, it was our game to lose."

Beckham helped the Browns take a 3-0 lead on their first possession on Austin Seibert's 23-yard field goal — a drive highlighted by a spectacular 33-yard, one-handed grab that got Cleveland down to the Jets 4.

It was reminiscent of Beckham's highlight-reel, one-handed reception for the Giants on "Sunday Night Football" as a rookie in 2014. On this one, Mayfield found Beckham down the right sideline, and the receiver stuck out his right hand to snare the ball behind Nate Hairston, starting in place of Trumaine Johnson — in nearly the same spot as his big catch five years ago.

And, yes, Beckham was wearing his expensive watch — despite the NFL telling him last week not to.

Beckham then had to come out of the game briefly because officials made him change his mirrored visor, saying it was reflective. He returned with a clear visor on his helmet.

Seibert's 48-yarder gave the Browns a 6-0 lead with 6:15 left in the opening quarter as Cleveland outgained New York 101-4 in the first quarter.

"We've got to take a hard look at this and figure out what's going on," Jets coach Adam Gase said.

Siemian was sidelined after throwing a long incomplete pass to Ryan Griffin. Cleveland's Myles Garrett slammed into him, and fell on top of him. Siemian appeared to roll his left ankle as Garrett, who was penalized for roughing the passer, sent him to the turf.

Siemian was on crutches and his left foot in a walking boot in the locker room. He will have an MRI on Tuesday.

Falk replaced Siemian with 7:58 left in the half and helped the Jets get their first points on a 46-yard field goal by Sam Ficken, the team's fourth kicker since July.

Siemian finished 3 of 6 for 3 yards, while Falk was 20 of 25 for 198 yards as the Jets lost their seventh straight at home, dating to last season.

Mayfield, who beat the Jets last year in his NFL debut during a Thursday night game that ended Cleveland's 19-game winless skid, was 19 of 35 for 325 yards, including the TD to Beckham, and an interception. ... Garrett had three of the Browns' four sacks. ... Bell had 68 yards rushing on 21 carries and 10 catches for 61 yards for the Jets.

The 26-year-old Cordero was killed after she exited Smith's Lamborghini and was standing on the highway's shoulder when she was hit by an oncoming car.