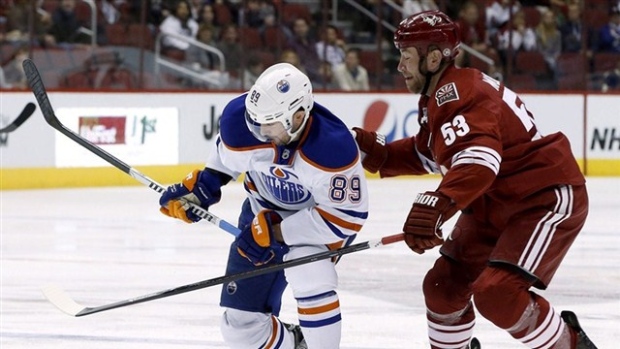 Sam Gagner had heard his name in trade talk for quite some time, but even he couldn't have expected this.

Gagner was traded twice Sunday, first from the Edmonton Oilers to Tampa Bay and then from the Lightning to the Arizona Coyotes. Edmonton got Teddy Purcell, the Lightning got a sixth-round pick and salary-cap space and the 24-year-old centre got to experience a "roller-coaster of emotions."

"I was talking to my agent, and he had said when Tampa traded for me that there might be something else going on," Gagner said. "So it was something I was prepared for. I wasn't really expecting to be traded (again) today. But it's one of those things that happens in sports, and I guess you've got to be ready for it at all times."

Trading Gagner, who has two years left on his contract at a cap hit of $4.8 million, now was important to Edmonton because his no-trade clause was set to kick in July 1. Coyotes general manager Don Maloney said he got a call from Oilers counterpart Craig MacTavish early Sunday, but by the time he called back to discuss Gagner there was already a verbal agreement with Steve Yzerman on a trade to Tampa Bay.

By sending Purcell, a 28-year-old winger, to the Oilers, the Lightning shed themselves of his $4.5 million cap hit over the next two seasons. The St. John's, N.L., native has 228 points in 401 regular-season games and 18 in 22 playoff games.

The Lightning were prepared to buy out Gagner's contract, but that plan was put on hold when Maloney expressed interest in the London, Ont., native whom the Coyotes coveted for some time but saw his salary as a bit too rich for their blood. Still, they wanted to get something done.

"(The Lightning) were trying to free up some cap space to do some other things, which obviously they did when they traded Teddy Purcell," Maloney said on a conference call late Sunday night. "Basically we hung up the phone, I said (to Yzerman), 'I'm going to have a beer, you go have a glass of wine and if you can come up with an idea, call me back."'

Maloney and his staff came up with the idea of putting gritty winger B.J. Crombeen and his $1.15-million cap hit in the trade, and it got done once Tampa Bay agreed to retain one-third of Gagner's salary and cap hit, which would have been the price had he been bought out.

The Coyotes could have waited for Tuesday's start of the free-agent signing period to take a run at Gagner, but that wasn't a risk Maloney was willing to take.

"That concerned me," he said. "As we're looking and exploring how we help our centre ice and what's happening right now, it scared me to death."

So the Coyotes paid a small price in the form of a sixth-rounder in next year's draft to make it happen and not worry about paying a free-agent premium or losing Gagner to another team.

"It came together in a hurry," Maloney said. "I think there's three of us that feel pretty good about our day so far."

None of the three general managers involved in Gagner's moves Sunday are finished. MacTavish shipping Gagner out of Edmonton, though, was no small step forward in his retooling effort.

Gagner, the sixth overall pick in 2007, seemed to be just outside the Oilers' core, which includes Taylor Hall, Ryan Nugent-Hopkins and Jordan Eberle. He has 295 points in 481 games, all with the Oilers, including 10 goals and 27 assists last season.

That kind of production isn't something Gagner is proud of and is hoping for a bounce-back season. The setting for that will now be the Arizona desert.

Edmonton moving on from Gagner wasn't terribly surprising to him, given the franchise's playoff drought that pre-dates his entering the league.

"You have to expect things to happen when the team hasn't done well," Gagner said on a conference call. "There's going to be change when things don't go well. I expected that at some point I might be part of it."

Drafting big German centre Leon Draisaitl third overall Friday night might have been enough to convince MacTavish it was time to move Gagner.

"I think (Draisaitl) helps us fill a need, gives us an opportunity to have a strong centreman with some size that can play ahead of or behind the Nuge, whatever way it works, and we'll give him that opportunity," director of amateur scouting Stu MacGregor said Saturday in Philadelphia.

In Arizona, Gagner will get the opportunity to replace Mike Ribeiro, who was bought out of the final four seasons of his contract for what Maloney called "behavioural issues." Gagner should get power-play time and a chance to provide the hard-working, well-coached Coyotes with an offensive spark.

"We got him for his offensive instincts and creativity," Maloney said. "Players can learn to play better defence. It's very difficult to learn to be more intelligent and more creative."

At 24, Gagner could still have room to grow. Maloney hopes he can become more than just a 40-to-50-point player along the way.

That's what Gagner was with the Oilers, who did not make the playoffs in any of his seven NHL seasons. He would have liked things to work out in Edmonton but understood something had to give when they didn't.

"We didn't have much success as a team and there's going to be a lot of changes that comes from that," he said. "It doesn't work out everywhere all the time."

It wasn't going to work out in Tampa, where the Lightning were manoeuvring for free agency with a series of moves Sunday. In addition to sending Purcell to Edmonton and Gagner and Crombeen to Arizona, they traded forward Nate Thompson and his $1.6-million cap hit to the Anaheim Ducks for fourth- and seventh-round picks in next year's draft.

All told and including retaining a portion of Gagner's salary, Tampa Bay cleared $5.65 million in cap space. It's believed that Yzerman is looking for a right-handed-shooting defenceman and could also be targeting a winger to play alongside Steven Stamkos.

That will have to wait until Tuesday when teams are able to sign free agents. By the time Sunday was over, three teams got to be satisfied with their respective hauls.

"Obviously Edmonton got what they needed, what they wanted and a real talented player in Teddy Purcell," Maloney said. "Tampa received what they needed to free up a lot of cap space, they get a draft asset and we got what we wanted, and we're searching for is a young, skilled centre-iceman in Sam Gagner and really a guy we've coveted for a while in B.J. Crombeen."