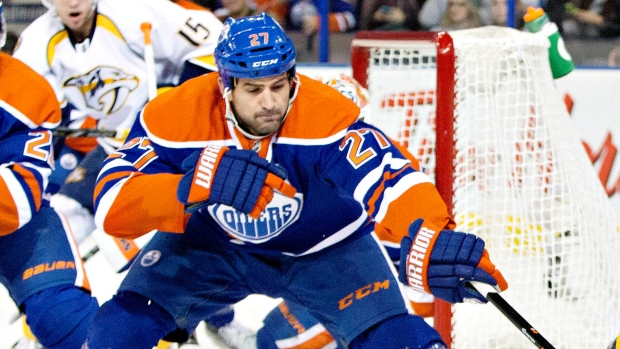 The makeover of the Edmonton Oilers is happening one move at a time, as they acquired winger Lauri Korpikoski on the eve of free agency in a deal with the Arizona Coyotes.

Edmonton sent centre Boyd Gordon to Arizona for Korpikoski, who has two years left on his contract at a cap hit of US$2.5 million.

"I really felt Lauri needed change of scenery," Coyotes general manager Don Maloney said on a conference call Tuesday night. "I think he had gotten a little stale, and I think he'll be a good player in Edmonton."

Korpikoski had six goals and 15 assists in 69 games this past season and 68 goals and 91 assists in 469 career NHL games.

The 28-year-old Finn had Edmonton on his list of teams he'd approve a trade to since November, according to agent Petteri Lehto. The organization's improvements made it an easy decision.

"He's seeing what's happening in Edmonton, so it wasn't any problem, actually," Lehto said in a phone interview. "He was quite pleased to make that trade."

Lehto said Korpikoski played through a high-ankle sprain this past season and that his play has been hampered by injuries. He said Korpikoski is "training like he's an animal" in Turku, Finland, and will be healthy for the start of Oilers training camp.

The 31-year-old Gordon had six goals and seven assists in 68 games with the Oilers last season. He also led Edmonton and ranked 11th in the league with 55.9 per cent success rate on faceoffs.

"I don't think much has changed in his game at all, I think he's still that hard-working competitive guy," Maloney said. "He's competitive, defensive-minded, excellent in the faceoff (circle) — all the little details of the game that (coach) Dave Tippett likes and appreciates."

Gordon said being with the Oilers through some down years was just a case of bad timing and wishes his former teammates the best.

"They're definitely on the upswing," Gordon said on a conference call. "Getting Connor McDavid is huge for the team, and they've made a lot of changes. I think they have great potential to be a good team.

"Sometimes things don't work out how you think they were going to work out when you came there. It's just the way it is."

Gordon has one year left on his contract at a cap hit of $3 million. Maloney said no salary was retained by either team in the trade.