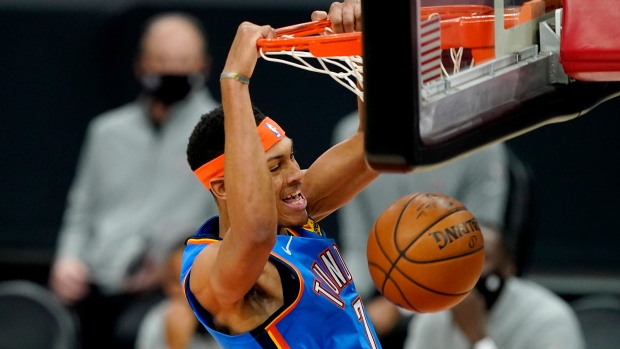 Chris Paul scored a season-high 32 points in his first game against the Thunder after being traded to the Suns from Oklahoma City during the off-season. The 10-time All-Star played well during his only season with the Thunder, averaging 17.6 points and 6.7 assists.

He had one of his best games this season at Oklahoma City's expense on Wednesday. The point guard shot 12 of 21 from the field and scored 13 points during a seven-minute stretch in the fourth that accounted for a big chunk of the team's offence.

But the young and improving Thunder hung close throughout the fourth and rallied in the final minutes. Lu Dort made a 3-pointer with 2 minutes left that put Oklahoma City up 96-95 and the Thunder didn't trail again.

Paul had a chance to tie the game with about 10 seconds left on a 3-pointer, but missed badly for an airball.

Phoenix played without All-Star guard Devin Booker, who missed his second straight game with a sore hamstring. The Suns have lost three straight. Jae Crowder added 17 points for Phoenix, which shot just 38% from the field.

Oklahoma City took advantage of some cold shooting from Phoenix — which missed 16 straight 3-pointers during a stretch — and pushed to a 59-46 lead early in the third quarter. The Suns eventually shook loose from the slump and pulled within 73-71 heading into the fourth.

The Suns jumped out to a 32-17 lead in the first quarter after getting 17 points from their bench. But the offence collapsed in the second and they scored just 10 points while missing all 11 3-point attempts. That helped the Thunder push to a 45-42 halftime lead.

Thunder: Horford was back in the lineup after missing six straight games because of personal reasons. ... Veteran guard George Hill didn't play because of a sprained thumb.

Suns: Backup guard Cameron Payne missed didn't play because of a sore foot. ... Forwards Dario Saric and Damian Jones both missed the game because of the league's health and safety protocols but were on the bench.

Suns coach Monty Williams was on the bench after missing the past two days of practice because of personal reasons.

“I don’t like missing days,” Williams said. “It’s not part of my career over my time in the league. I haven’t missed days. So that’s always hard for me, but there’s just certain things in my life that I have to attend to. I may have to do it a few more times going forward, but I certainly appreciate the level of concern and respect for my privacy. At the right time, I’ll let everyone know what’s going on, but for now it’s a private matter.”

Thunder: Starts a five-game homestand with a game against the Nets on Friday.

Suns: Host the Warriors on Thursday.