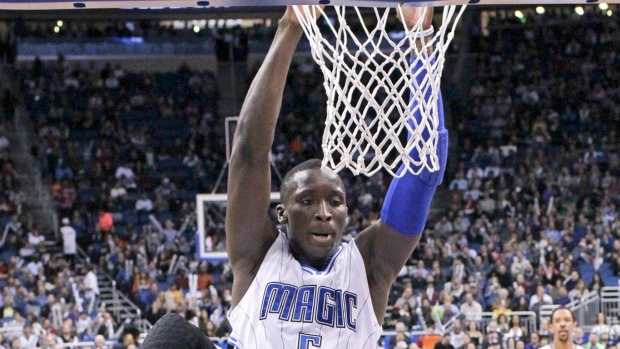 "I wanted to give back," Oladipo told The Associated Press. "I feel like that's the type of human being I am — first and foremost — just to give back to people who are not as fortunate as me. I'm all about making a difference, and I felt that was the best way to do so."

Last year, the East defeated the West in a team dunk competition, and the winning team of Paul George, Terrance Ross and John Wall donated $100,000 to the American Heart Association and U.S. Fund for UNICEP.

The three research facilities chosen by Oladipo are located in cities that represent milestones in his life.

Children's National Medical Center in Washington, D.C., is near where he grew up in Maryland. That donation is pegged for pediatric cancer; the Melvin and Bren Simon Cancer Center in Indianapolis, based at his alma mater Indiana University, is working on breast cancer research; and the donation to Florida Hospital Cancer Institute in Orlando is earmarked for its Myeloma Center. Magic co-founder Pat Williams launched a fundraising campaign to build the centre in 2013.

The 74-year-old Williams was diagnosed in 2011 with blood multiple myeloma, an incurable, but treatable blood cancer.

Oladipo said he wanted to contribute in Indiana where he's "a Hoosier for life" and also to a centre with a tie to the Orlando franchise that "believed in me on draft night two years ago."

Oladipo was drafted second overall in 2013 by the Magic. He's the second-leading scorer on the team, averaging 16.5 points and 3.8 assists. He'll also play in the rising stars challenge with teammate Elfrid Payton on Friday night.

"I want to give back to the areas that gave to me," he said. "(Orlando) moulded me and they didn't have to draft me, but they did. I felt like I needed to give back and keep it in the family."

In addition to his personal donation, Oladipo is also participating in a three-day fundraising campaign that begins Thursday on social media outlets Twitter and Instagram. He'll be using the hashtag "#dunkcancer" to encourage fans to participate by purchasing T-shirts.

Oladipo wouldn't share his plans for what dunks he wants to use on Saturday, but said his involvement in this campaign would give him some extra incentive to win.

"It's not even the pressure, it's just extra motivation," he said. "We gotta get this done because it's for a better cause."