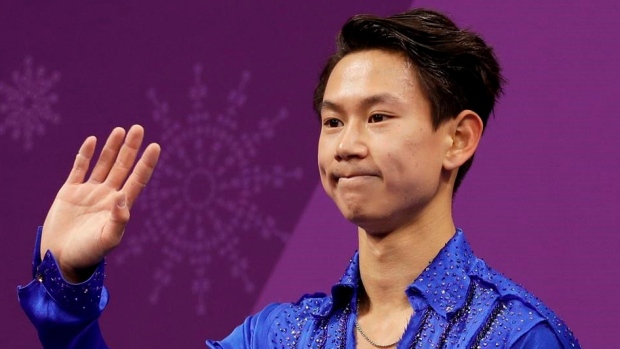 MOSCOW — Olympic figure skating medallist Denis Ten was killed Thursday, and prosecutors in Kazakhstan said they were treating the case as murder.

Ten was stabbed after a dispute with people who allegedly tried to steal a mirror from his car in his home city of Almaty, Kazakh news agencies reported. Doctors in Almaty say the 25-year-old skater died in the hospital there.

Born in Kazakhstan to a family of Korean descent, Ten's bronze at the Winter Olympics in Sochi in 2014 made him Kazakhstan's first medallist in figure skating.

Canadian skater Patrick Chan, who won silver in the same competition, said on Twitter he was "honoured and grateful to have shared the ice" with Ten. "One of the most beautiful skaters to have graced our sport. My thoughts are with his family during this unimaginable time."

"So sad to hear of Denis Ten's tragic passing. He was as kind as he was talented," posted ice dance star Scott Moir. "It was an honour to share the ice with him. You will be greatly missed, Denis."

Added four-time world champion Kurt Browning: "With the loss of Denis Ten the skating world lost one of our future leaders. Having recently worked with him, I was in awe of his vision and love for the world. He had infinite resources to offer and so willing to share."

The International Skating Union said it was "deeply saddened" by news of Ten's death.

"His shining achievements brought glory to our country and helped popularize sport among young people," Kazakhstan President Nursultan Nazarbayev said. "Denis was not only an excellent athlete, whose talents was recognized and honoured in many countries of the world, but also a remarkable personality and a true patriot of Kazakhstan."

Ten also won the Four Continents championships in 2015, and was a world championship silver medallist in 2013.

Ten struggled with injuries in recent years and could manage only 27th at the Pyeongchang Olympics in February.

Ten hadn't formally retired from skating, but in recent months he'd often spoken of his studies in economics and his plans to write a movie script.

"Independently of what happens in the future, I realize that I had a great career, where everything happened — highs and lows, medals and disappointments, nice memories and not so nice ones, unique events, meetings and many magical things," Ten said in September in an interview with the ISU website.

"Somewhere I realize that I was a really lucky person with a quite fulfilled sports life."