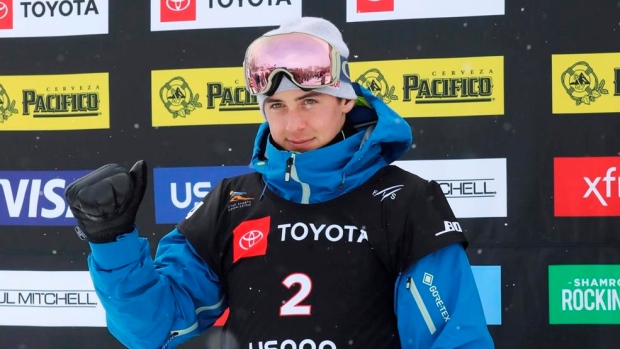 Canada's Mark McMorris is doing all he can to stay safe ahead of the Beijing Olympics — which he expects will start as scheduled.

McMorris will be competing at a snowboarding World Cup event in Mammoth Mountain, Calif., this weekend and then "laying incredibly low" until the Beijing Olympics begin in early February. The 2020 Summer Games in Tokyo were delayed one year because of the COVID-19 pandemic and surging infection rates because of the Omicron variant have once again raised the spectre of a postponed Olympics.

He said he's relying on room service in his Las Vegas hotel room until it's time to leave for California, then he'll do some training in Whistler, B.C., before holing up and waiting for his flight to China.

"Think it's a small price to pay for something that is a huge goal of mine to go there and compete and I've been waiting for a while for this one," said McMorris on Monday. "It's really too bad that (Omicron) popped up and it's so transmissible right before the Games.

"It seemed a little chiller when the Summer Games were going on. But yeah, here we go."

McMorris will be competing in the big air and slopestyle competitions at his third Olympics in Beijing. He won a bronze medal in slopestyle at the 2014 Sochi Olympics and then earned the same result in 2018 at the Pyeongchang Games, 11 months after a catastrophic accident while going snowboarding in the backcountry outside of Whistler.

The 28-year-old Regina native said that aside from this weekend's competition he will be isolated with his team until Beijing. When contact is necessary with people outside that bubble he will be "double masked up."

"Just really trying to stay out of harm's way for just a month. You know, just get there at least," said McMorris. "I haven't been so freaked out of getting it until now."

McMorris had a challenging 2020-21 season including struggles qualifying for the Beijing Olympics. He missed the opening World Cup event of the season in Laax, Switzerland, when all of Canada's team was quarantined because of COVID-19.

He then tested positive for the virus — although he remained asymptomatic — on Jan. 26, forcing him to miss the X-Games in Aspen, Colo.

Much of his season was captured in "Chasing Winter," a four-part documentary series produced by Red Bull and currently streaming on CBC Gem. Starring McMorris and featuring Americans Jake Caster, Brock Crouch, Hailey Langland, as well as Japan's Takeru Otsuka and Miyabi Onitsuka, the series follows the snowboarders as they try to qualify for the Olympics — which, as a running joke, none of them can refer to by name for copyright reasons.

"It was really cool to show me going to my third Games and what my path has looked like over the last four years," said McMorris. "And then bring in all these people that I think have really, really awesome stories to tell, and have a good shot at going (to the Olympics) and just wanting to bring the audience in and show that it's a real thing. It's gnarly and it's fun. "

This report by The Canadian Press was first published Jan. 3, 2022.