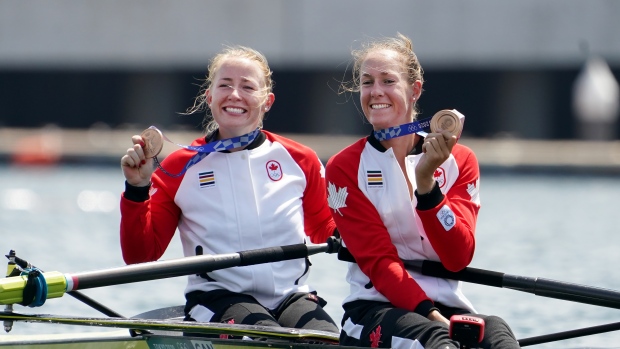 TOKYO — Canada has its first rowing medal at the Tokyo Olympics.

Victoria's Caileigh Filmer and Hillary Janssens of Surrey, B.C., took bronze Thursday in the women's pair with a time of six minutes 52.10 seconds.

"The first 1,000 (metres) was about being physical," Filmer said. "And the second half was about rowing with our heart.

Filmer and Janssens are the first Canadians to medal in the event since Marnie McBean and Kathleen Heddle won gold at the 1992 Games in Barcelona. Heddle died of cancer at age 55 in January, while McBean is serving as the country's chef de mission in Tokyo.

"That's so special," Janssens said. "I'm so glad to be able to do that. Especially in memory of Kathleen ... thinking about her family, and obviously Marnie's here and I hope Marnie watched that and is proud.

"Two of the most amazing Canadian athletes and we're so happy to continue their legacy."

Filmer and Janssens led after 500 and 1,000 metres, and sat second with a quarter of the race to go before hanging on for bronze late with a hard-charging boat from Britain on their tail.

"I don't remember too much," said Janssens, 27. "All we could really see was the British and we knew the Kiwis were definitely up on us a little bit.

"Stay clean, stay in the lane, and empty the tanks, because that's what we trained for."

Filmer said the goal was to "go internal" and not worry about any of the competitors around them.

"That's all we need to know — that it was fast and that we had a plan."

Conlin McCabe of Brockville, Ont., and Kai Langerfeld of North Vancouver, B.C., were the other Canadian rowers in a final Thursday, finishing fourth in the men's pair on the 2,000-metre course at Sea Forest Waterway.

Meanwhile, Carling Zeeman of Cambridge, Ont., and Trevor Jones of Lakefield, Ont., both failed to advance to the finals of the women's and men's single sculls.

Canada's women's eight will race for a gold Friday.

The country's rowers came to Tokyo looking to rebound after a disastrous showing at the 2016 Rio Games that saw the program secure just one medal.

"I definitely felt a little bit of that," Janssens said of being one of Canada's podium hopes. "But I only wanted to live up to it. I felt like the whole team knew what we could do out there, and I wanted to make them proud. I wanted to show this is not just our hard work that got us this medal.

"This is everyone on the team who pushes us every day."

The Canadians qualified 10 boats for Tokyo — the most since the 1996 Olympics in Atlanta — and have a gender-balanced team for the first time in their history at the pandemic-delayed Games.

"Mentally, physically, everything — we had a lot of hurdles," Filmer said of that extra year spent preparing for Tokyo. "There was a lot of days that we spent out of the boat due to mental health or injuries — just everything. It was one thing after another, but it was just believing in the process and believing in each other.

"Together, we could get through anything."

Janssens added "no one else has spent more time on spin bikes" over the last 12 months than the duo.

"We have done our time with injuries," she said as her voice started to crack. "Mentally it's really tough to believe, in the middle of winter when you're trying to build fitness and you don't even know if it'll pay off at the end.

"To have this makes it worth it."