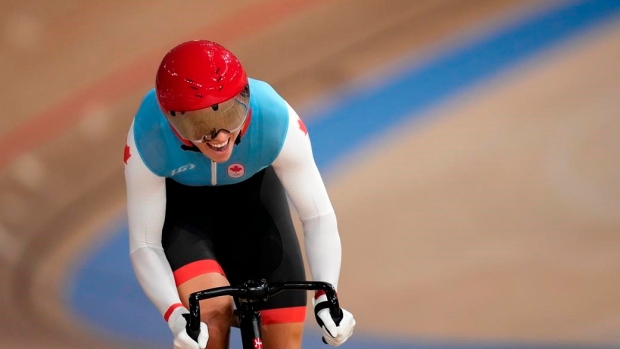 IZU, Japan — Kelsey Mitchell advanced to the quarterfinals of the track cycling women's sprint in the blink of an eye.

Maybe even less than that.

Mitchell, from Sherwood Park, Alta., edged New Zealand's Ellesse Andrews by five-thousandths of a second in the 1/8 final Saturday at the Tokyo Games, avoiding the repechage and putting herself in an excellent position to compete for a medal in the event on Sunday's final day of Olympic competition.

She made good on that chance later in the quarterfinals, beating teammate Lauriane Genest of Lévis, Que., in a pair of races to advance to a semifinal showdown with 2020 world champion Emma Hinze of Germany.

"Unfortunately I had to race against my teammate, who I train with every single day," said Mitchell. "We joked about saving our match sprint for the Olympics, it was preferably in the final, but unfortunately we had to do it in quarters. I’m happy with the win. I’m sad that we can’t go to semis together, but I know she’ll kill it in the 5-8 (placement race)."

Genest, a bronze medallist in the women's keirin on Thursday, advanced to the quarterfinal by edging France's Mathilde Gros — by an even tighter margin of one-thousandth of a second — in a repechage.

In the all-Canadian best-of-three quarterfinal, Mitchell beat Genest by margins of .041 seconds and .058 seconds to advance.

"I really hope all the hard work pays off and it shows tomorrow (Sunday). We’ll see," said Mitchell.