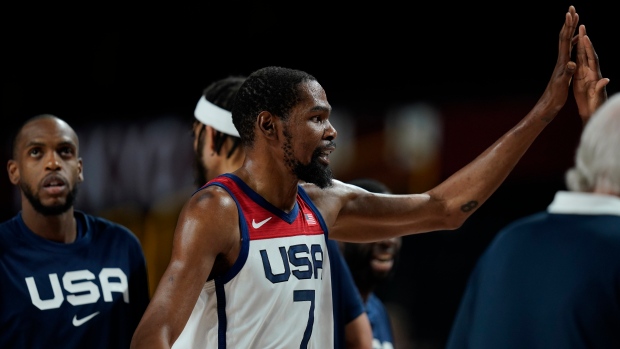 SAITAMA, Japan (AP) — Kevin Durant and the Americans still have their grip on gold and it’s going to take more than a few bad minutes for anyone to take it away from them.

They were awful early, then awesome afterward against Australia.

Durant scored 23 points, Devin Booker had 20 and the U.S. blew past and eventually blew away the Aussies 97-78 on Thursday in the Olympic men’s basketball semifinals after falling into a 15-point hole.

With their gold-medal streak looking in jeopardy midway through the second quarter, the Americans overwhelmed the Australians with a 48-14 stretch that gave them a 74-55 lead after three periods.

“Everything fell in line for us in that second half and that’s who we are,” Durant said.

The U.S. missed its first 10 3-point attempts and didn’t hit one until late in the second quarter. Then it felt as if the Americans hardly missed again, with Booker making three 3-pointers.