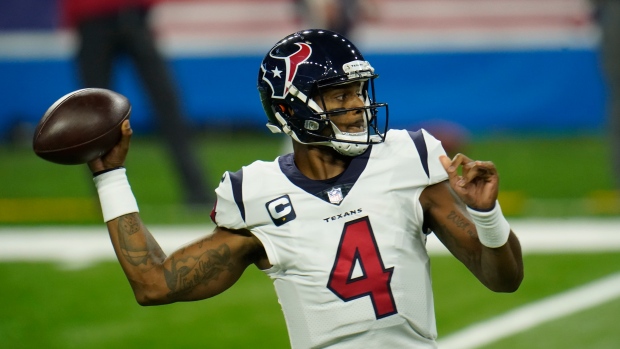 HOUSTON — One of the 23 women who have filed lawsuits accusing Houston Texans quarterback Deshaun Watson of sexual assault and harassment has dropped her case, citing privacy and security concerns after some of the women were ordered to make their names public following court hearings last week.

In court documents filed late Tuesday, the woman’s attorney, Tony Buzbee, said she “reserves the right to refile the case once such concerns are addressed.”

Buzbee has said the women have faced death threats and attacks on social media since accusing Watson and had wanted them to be allowed to remain anonymous.

The women accuse Watson of exposing himself, touching them with his penis or kissing them against their will while he got a massage. At least one woman has alleged Watson forced her to perform oral sex. All of the women are either licensed massage therapists or worked in a spa or similar business.

After the one woman dropped her case, that had left 21 lawsuits pending. But on Wednesday afternoon, another woman filed a lawsuit, bringing the total number of cases to 22. The latest lawsuit was filed with the woman's name.

All the previous lawsuits had been filed under the name Jane Doe. But after two court hearings last week and agreements between Buzbee and Watson’s attorney, Rusty Hardin, the other 21 women were expected make their names public by having their lawsuits refiled with their names. As of Wednesday, 20 of the women had refiled their lawsuits with their names on them. The remaining woman was expected to do the same by Thursday.

“It appears the Watson team thinks that if these courageous women are forced to identify themselves, they would slink away and not pursue this matter. Watson and his counsel badly miscalculated,” Buzbee said in a statement Tuesday.

In criminal cases, individuals alleging sexual assault are usually not named as the case proceeds through the criminal justice system. Texas law does not offer similar protections in civil cases.

Hardin has said it was important that the women be identified so Watson can properly defend himself.

But during a news conference last week, Hardin asked people to not threaten the women on social media as “that doesn’t do anything but demean all of us.”

Hardin has said “some sexual activity” happened in some of the massages but that Watson never coerced any of the women.

The first woman who sued Watson and also was the first to identify herself publicly, Ashley Solis, told reporters last week she now suffers from panic attacks, anxiety, depression and is no longer comfortable working as a massage therapist.

Hardin has alleged the lawsuits were filed following a failed attempt to blackmail his client for $30,000. The first alleged assault took place in March 2020, with the most recent one alleged to have taken place last month.

Houston police and the NFL have said they are investigating the allegations, and Nike has suspended its endorsement contract with Watson.

Watson led the NFL in yards passing last season. He signed a four-year, $156 million contract extension with the Texans last off-season, but he became unhappy with the direction of the team as Houston sunk to 4-12. Watson requested a trade in January.