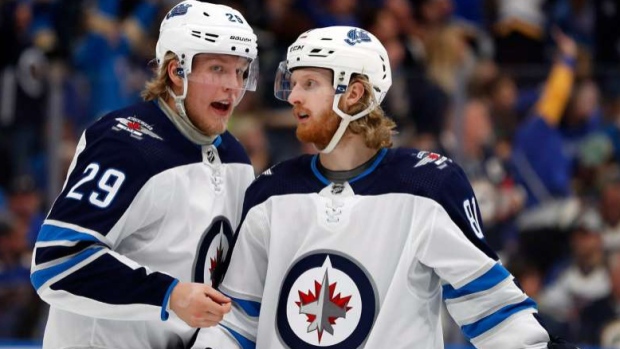 NEW YORK — Training camps are nearly halfway finished. But Matthew Tkachuk is training with the OHL’s London Knights instead of the NHL’s Calgary Flames.

Kyle Connor is working out with the Michigan Wolverines and Patrik Laine is spitting truth in Switzerland while he skates with SC Bern.

One by one, players have signed and returned to their teams, but eight restricted free agents remain unsigned including other critical players such as Tampa Bay's Brayden Point and Mikko Rantanen of the Avalanche.

The reality now is that just one pressure point remains in these standoffs: opening night. Less than two weeks away now, it carries the threat of not only missing games, but also missing a paycheque.

Once that line in the sand is crossed, the only other real threat that exists is the Dec. 1 deadline, the last day for RFAs to sign and still be eligible for the season. William Nylander took it to the limit last year, signing in the waning minutes before losing a year.

There are a million different ways to reconfigure the NHL’s RFA dilemma, but at least two owners are in favour for what they believe is a simple solution:

Move up the Dec. 1 deadline.

“In my personal opinion, it’s within everyone’s best interest to move it up,” one NHL owner told TSN after Tuesday’s Board of Governor’s meeting. “Right now, the way this has played out isn’t good for anyone. It’s tough for teams to manage the uncertainty, it’s tough for the player to miss time, and it’s tough for fans to not see star players on the ice.”

“The only way to get anything done is to have a deadline,” another NHL owner said.

Both owners requested anonymity because the NHL is actively engaged in collective bargaining negotiations with the NHL Players’ Association. Any change to the CBA, including moving up the Dec. 1 deadline, would need to be negotiated with the NHLPA.

There are other ways to eliminate prolonged RFA standoffs, but each comes with their own sticking point.

For instance, entry-level (rookie) contracts could become four-year deals instead of the current three, which could then give players arbitration rights upon expiration. But that wouldn’t be very palatable for the NHLPA, given that it would give teams another year of potentially star impact players at a drastically reduced salary than what they are worth - as the market is demonstrating.

Or, all players coming off of a three-year entry-level deal could be given arbitration rights - or at least the ability for teams and RFAs to mutually agree to “mediation” to produce a new contract. But that probably wouldn’t be palatable for the teams, because it results in lost leverage.

Currently, the only leverage these RFAs have - aside from signing an offer sheet, if they’re even eligible - is to withhold services.

Moving up the deadline is one way which seemingly does not negatively impact either side.

A handful of NHLPA-certified player agents were polled by TSN on the idea of moving up the deadline and not one of them could think of an argument why that would not be beneficial to the process.

“At the end of the day, whether it’s Dec. 1 or Oct. 2 or Oct. 15, the number is ultimately what the number is going to be,” one agent said, again requesting anonymity because the NHLPA is in negotiation with the NHL. “As it is, Dec. 1 is just an arbitrary date. Why not change it to a different arbitrary date?"

NHL deputy commissioner Bill Daly said Tuesday that so far, the NHL has not had any discussions with the NHLPA “about modifying anything in the CBA with respect to Group II [restricted free agents].”

Currently, Daly said he believes the system is working as intended, that when he first started at the NHL more than two decades ago, the number of unsigned RFAs into training camp was “a far bigger number then.”

Maybe so, but this class of RFAs now accounts for some of the bigger stars in the game. Teenagers and players on entry-level deals are now some of the league’s most important players.

Daly pointed to Nylander’s decision to wait until Dec. 1 last year as an outlier.

“So, this is kind of a one-year event right now,” Daly said. “If it becomes something that continues and is p problematic going forward, then maybe it’s something that we have to address. But right now we don’t think this is a problem...Contracts are getting signed."

One by one, Zach Werenski set the market that got Ivan Provorov, Charlie McAvoy and Brandon Carlo signed, a predicted domino effect. Travis Konecny likely aided the Canucks’ dealings with Brock Boeser, and on and on.

Nevertheless, we’re at an impasse again, and the only real and true deadline is still 75 days away.

That can be easily fixed, the two owners said, and there is an appetite to do so, because it’s a win-win-win scenario: for players, teams and the fans.

“This is one of those issues; I view it as low-lying fruit,” one owner said. “Hopefully, we can take care of it.”