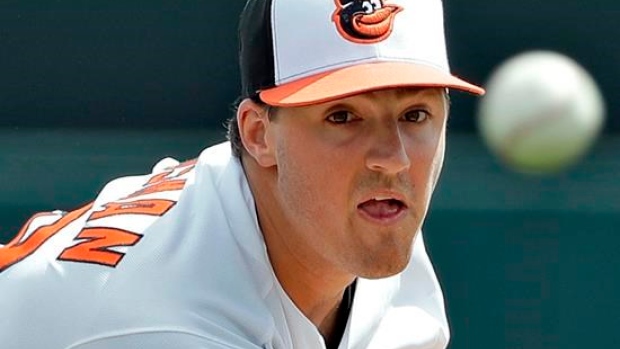 SARASOTA, Fla. — The Baltimore Orioles will have a new starter for their April 3 opener for the first time in the last four years.

The move to start the 26-year-old Gausman wasn't unexpected. Showalter had ruled right-hander Chris Tillman out of the opener when spring training began last month because of a sore right shoulder.

Gausman, who was 9-12 with a 3.61 ERA last season, wasn't surprised by the announcement.

"Really it was kind of trying to piece it together. Thought I might have a chance obviously with Tilly out," Gausman said. "That's one thing. If Chris is healthy right now it's his game to start. But happy, excited. A lot of things to be thankful for in my life right now. Obviously, an exciting time for my family and obviously looking forward to it."

Tillman, who had started the previous three openers, was hoping to become the first Orioles pitcher since Jim Palmer (1974-77) to start four straight openers. Instead, it's Gausman, the fourth overall pick in the 2012 draft. Gausman is in his fifth season with Baltimore, but this will be the first time he began the season in the starting rotation.

"Not so much nervous, just anxious. I know it's going to be awesome. I love pitching in Baltimore, so happy that it's at home. Hopefully the first of many, but like I said, pretty exciting and definitely looking forward to it. I think it's going to be a lot of fun," Gausman said.

Even when it's seemingly obvious, Showalter never announces his opening day choice until late in spring training.

"I had some guys to pick from. I just thought Kevin was best equipped in a lot of different areas," Showalter said. "Kevin is the guy who can help us put our best foot forward."

Last season, Gausman had a strong second half, going 8-6 with a 3.10 ERA. His win on the final day of the regular season on Oct. 2 at New York, propelled the Orioles into the wild-card game.

"The biggest thing I did in the second half was get deep in games, which really is all you can try to do," Gausman said. "I felt like I was more consistent like that in the second half and just kind of feel like I hit the ground running this year so far."

"He's got a good feel for the big leagues as compared to when he came in," Showalter said. "He's learned a lot of things about how to pitch when he's not carrying his best stuff."

NOTES: Showalter has decided on RHP Dylan Bundy as the team's starter for the second game, and after LHP Wade Miley throws at Atlanta Tuesday, he'll make a decision on who will start the third game. Miley was scratched from his last scheduled start on March 20 with flu-like symptoms. . C Chance Sisco was reassigned to minor league camp. . OF Anthony Santander (elbow), a Rule 5 draft choice, is expected to start the season on the 10-day disabled list. . Tillman, who threw for the first time Sunday since his March 15 cortisone shot, will also start the season on the DL. He'll throw again Tuesday.