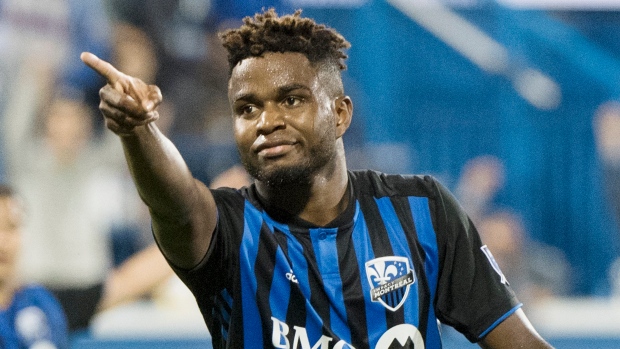 MONTREAL — Despite a long layoff, and a long game delay, Orji Okwonkwo returned to form for the Montreal Impact on Wednesday night.

Okwonkwo scored twice in his first game back from injury, including a game-winning half-volley strike, to give the Montreal Impact a 2-1 victory over the Portland Timbers at Saputo Stadium.

"He's got the power to hurt his opponents," Impact manager Remi Garde said.

Okwonkwo had missed the last three games for Montreal (9-3-7) due to a leg injury he suffered against Los Angeles FC May 25th.

"Kudos to the physiotherapists, I think they did a very good job," Okwonkwo said. "I came back very quick. It was supposed to be six weeks out, but I came back in three weeks. I appreciate the good work and they did very well."

As much as Okwonkwo gave credit to the Impact's medical staff, his coach thought Okwonkwo deserved recognition too.

"He worked during the break," Garde said. "I saw him working out on training sessions and I knew he was ready to, I don't mean to score two goals, but I was sure that he was ready with the right mind."

Tomas Conechny replied for Portland (5-8-2) early in the second half.

The kickoff was delayed 45 minutes thanks to thundershowers in the area.

Okwonkwo hustled to get his first shot of the game in the 21st minute, after a back pass wasn't retrieved in time by Timbers defender Claude Dielna. Okwonkwo sped past him, entered the penalty area and fired a shot on net. The ball went off Timbers 'keeper Jeff Attinella's hand before it went off the near side post and out.

Seven minutes later, Okwonkwo would fare better. He was sprung forward with a pass from defender Bacary Sagna and he once again got the better of Dielna. The winger fired a shot towards the left corner of the goal, beating Attinella for his third goal of the season.

The Timbers equalized in the 53rd minute off a set piece. Following a free kick from Marvin Loria, the ball was headed to the ground by Julio Cascante before Conechny headed the bouncing ball past Impact goalkeeper Evan Bush.

Okwonkwo saved his best in the 66th minute. After a long ball was kept up in the air by midfielder Saphir Taider, Okwonkwo let the ball bounce before turning around and firing a shot towards the top right corner past Attinella for his second of the night and fourth of the season.

The winger was subbed off in the 70th minute of play for Mathieu Choiniere, and was then saluted by the fans with a standing ovation.

"Kudos to the fans and everyone that came to support the game," Okwonkwo said. "I'm the man of the match today. It's a great thing for me. It's a big opportunity for me. And I'll keep moving as well."