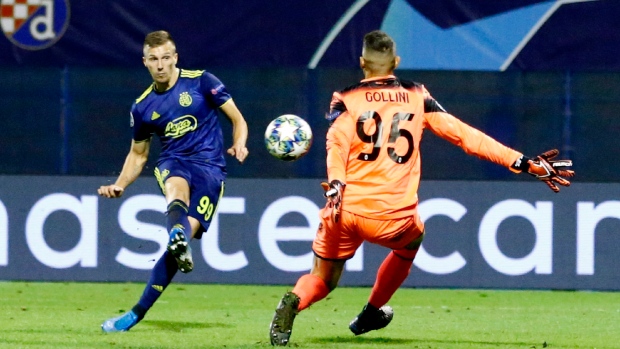 ZAGREB, Croatia — Mislav Orsic scored a hat trick Wednesday as Dinamo Zagreb ended an 11-match losing streak in the Champions League group stage with a 4-0 win over Atalanta, which was making its competition debut.

Orsic's first was a low shot from the edge of the area after the half-hour mark. Eleven minutes later, he had an uncontested header. Then he completed the hat trick midway through the second half by beating the offside trap and using one touch before striking into the far corner.

The 26-year-old Orsic, who also scored three goals in Champions League qualifying, recently made his international debut with Croatia.

Marin Leovac opened the scoring by redirecting in a cross from close range.

Manchester City won 3-0 at Shakhtar Donetsk in the other Group C opener.

Croatian champion Dinamo was in danger of matching Anderlecht's record of 12 straight losses in the competition between 2003 and 2005.

Atalanta qualified by finishing a club-record third in Serie A.