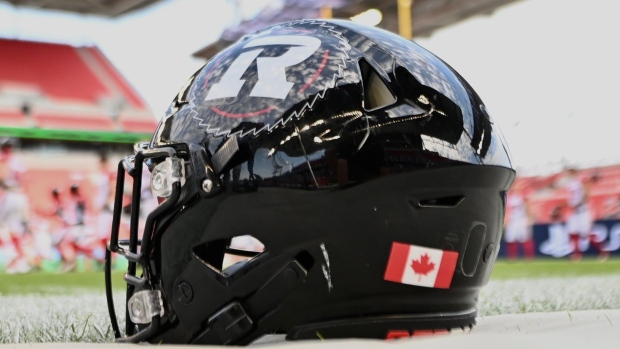 OTTAWA — Losing is not something the Ottawa Redblacks want to be comfortable with.

When the Redblacks joined the CFL in 2014 they were determined to field a competitive product every single year and while they’ve had their struggles they refuse to become complacent.

With a 3-11-0 record the Redblacks sit dead last in the CFL standings and look like a team that’s given up.

“When you start losing it’s something that creeps into your head,” said Redblacks GM Shawn Burke. “Just like the momentum of winning can lead to more wins, the momentum of losing can go the opposite way and I think that happened to us a bit.”

Bob Dyce has been named interim head coach for the remaining four games of the season.

The next four weeks will be about showing what the Redblacks want to be moving forward and Burke asked fans for support and patience as they attempt to turn things around.

Burke knows many might wonder why something wasn’t done sooner or why bother at this point, with the playoffs seeming nothing more than wishful thinking, but he wanted to give LaPolice the best chance to prove he could turn things around.

“The reality is we went through some transition of a new team coming in, new management coming in and then some adversity,” said Burke. “Every team is going to go through adversity, that happens in football, but it has to go into your decision making and giving someone a fair shot.”

The Redblacks have been in a free fall since 2019 and are determined to put an end to this disappointing stretch of football.

Nearly a year after the team parted ways with GM Marcel Desjardins, Ottawa Sports and Entertainment Group CEO Mark Goudie says the franchise is still cleaning up the mess left behind.

“I think we dug ourselves a pretty big hole in 2019 and I think we’re still digging ourselves out of that hole,” said Goudie. “I know we’ve got the right guy now to get us out of that hole. I would have expected that we would have made a little bit better strides this year, but it hasn’t worked out and we don’t want to get into excuses but losing your franchise quarterback (Jeremiah Masoli) on a fragile team wasn’t a positive step.”

Dyce has a wealth of experience with nearly 20 years experience coaching in the Canadian Football League and served as the Saskatchewan Roughriders interim head coach in 2015 for the last half of the season where he posted a 3-6 record.

He’s been the Redblacks special teams coordinator since 2016.

“I’ve done this before,” admitted Dyce. “Being a special teams coordinator is very close to being a head coach. Some of you might not see that in that way, but you have to take all the factors that are happening at all times and know the situation so something like this isn’t too big. I’m honoured with the opportunity to do this.”

That’s not to say it wasn’t difficult considering LaPolice was the one who gave Dyce his first coaching opportunity and the two are close friends.

Dyce said the first call he made was to LaPolice and the two had a great conversation and committed to getting together for a steak dinner once the season was over.

LaPolice held the dual role of head coach and offensive coordinator and Dyce shared “they’re still exploring options in that regard,” but did say there would be a dedicated play caller, but the individual hasn’t been identified just yet.

As for Dyce he plans to hold on to his duties as special teams coordinator but said they might consider bringing someone in to support him.

Ottawa has four games remaining with the next not until next Monday, when they take on the Montreal Alouettes, which provides Dyce some time to get prepared.

“I look at these four games as the foundation of us getting to where we need to be,” said Dyce. “There’s no guarantee that I’ll be there for when they get there, but I can take great pride if I set that foundation and we’re working toward it and we get to that direction.”

This report by The Canadian Press was first published October 3, 2022