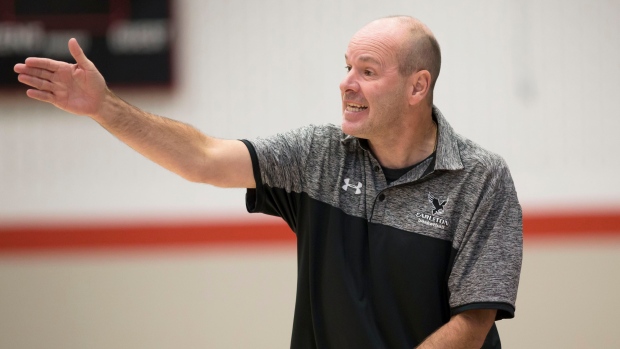 For the past several years, the Ottawa Senators have brought in Dave Smart to speak to their prospects during the club’s rookie training camp in the summer.

As the winningest coach in Canadian university basketball history, Smart’s ability to connect with young players has been an element the Senators wanted to tap into for themselves.

But this past July, there was a new member of the Senators coaching staff who was absolutely astounded by Smart’s ability to connect with young athletes.

And after D.J. Smith heard the basketball coaching legend address his prospects, he knew he would have to find a way to bring Smart into the fold on a more regular basis.

“I listened to him talk to our young guys at rookie camp and I thought it was exceptional. Just his view on how you put winning teams together and it’s very similar to what I believe in,” Smith said on Saturday. “I just said that’s a guy that I could use.”

And to that end, the Senators have now brought Smart into the fold on a fairly regular basis as a consultant. Smart – who stepped aside as the Ravens head basketball coach in the spring to become the university’s director of basketball operations – has daily contact with Smith and is often seen observing practice from the stands at Canadian Tire Centre.

Smart – who boasted a ludicrous career winning percentage of .925 against USports competition – has the reputation of being a tightly-wound perfectionist who demands the most out of his players and staff. Smith – in his first full-season as an NHL head coach – is known as one of the most gregarious personalities behind the bench – extremely loud and equally demanding.

“I’m not sure who people think is crazier,” Smart told TSN.ca with a laugh. “We hit off right away. I’m a basketball guy, not a hockey guy. But we see things the same way.”

For many years, the Senators have been widely panned for not being open-minded when it came to such things as analytics and progressive concepts within the game. But bringing Smart into the fold as a consultant gives a window into the innovative culture Smith is trying to foster around the team.

“The reason he’s on board is he’s the winningest coach in college basketball here.  Whether it’s hockey, basketball, baseball, football whatever, it’s still coaching and you’re dealing with people,” Smith explained. “He’s here to kind of help me in a senior role to see ‘Are we pushing the guys enough?’ ‘Are we pushing them too hard?’ And give us his perspective from the outside.”

Smart is very direct when asked how his college basketball success could potentially translate into success for a re-building NHL team.

“Winning is winning. Culture is culture. It translates from sport to sport,” Smart says flatly.

Smart points out that he has daily conversations with Carleton Ravens hockey coach Shaun Van Allen and football coach Steve Sumarah and often times the lessons carry over from sport-to-sport. So the idea of him helping out an NHL team isn’t a totally foreign concept.

“It doesn’t have anything to do with hockey, it just has to do with people,” adds Smith. ”And I think it’s going to help me.”

One of Smart’s key roles this season is to essentially serve as a fly-on-the-wall when Smith and his coaching staff are addressing the players in a group setting. Smith considers Smart to be an expert on body language – and he relies on the long-time basketball coach’s ability to read the room from afar.

“It’s not like I’m spying on anybody. I’m just observing,” Smart explains. “If I see a player is struggling with a concept, I’ll bring that forward. DJ just wants the players to feel comfortable.”

Smart says one of the reassuring elements of his newly-formed relationship with Smith is that neither person feels the need to sugar coat any of their messaging to each other.

“He’s not sensitive. He’s open to me saying things the way I see them,” Smart added.

Smith says that Smart’s role could expand during the season to include individual meetings with Senators players, but for now, he’s appreciative of the feedback he’s receiving on how group meetings are transpiring.

“Sometimes you think you’re doing a great job in a meeting, but you need someone to tell you the truth. Are the players getting what I’m saying? Is it too long is it too short?” Smith asks aloud. “He’s really good at reading body language and guys during meetings. He’ll give me feedback saying, maybe I should talk to this guy or maybe I should talk to that guy.”

When he was an assistant coach with the Maple Leafs, Smith said he really appreciated the ability to tap into the mind of Jacques Lemaire, who served as an outside consultant for the coaching staff in his first year in Toronto.

“Sometimes, when you’re not in the battle and you’re a little bit outside, you see it differently. And it’s a great perspective,” says Smith.

With Lemaire, Smith was able to confer with one of the greatest defensive coaching minds of his generation. In a way, he has the same luxury with Smart – whose air-tight defensive system was the backbone of winning 14 national championships under his watch. The Senators biggest issue over the past couple of seasons has been in their own zone, where they have constantly been hemmed into their own zone.

But does Smith believe that the concepts of defensive basketball – where Smart would constantly force his players to play as a five-man unit – can translate directly into hockey?

“One hundred per cent in can,” Smith said staunchly. “One of my beliefs is that you have to keep the puck out of the net to win hockey games. It is a five-man mentality. Once your team truly believes how you have to play to win the game, you can start to win a lot more hockey games. And I think he can help us with that.”

Smart, however, is quick to point out that he will not be handling anything from a systems standpoint.

“I don’t get into the technical stuff. It’s not like I’m saying ‘I don’t like your forecheck’,” says Smart.

He will watch most Senators home games from the 400-level suite occupied by general manager Pierre Dorion and other members of the staff. But Smart is quick to point out that he tries to keep his distance from that group – to give them the space they need to scout the game. When he’s watching from above, Smart is looking for positive or negative body language from the players and staff – something he can detect from the upper deck of Canadian Tire Centre.

Smart will not be in attendance for Saturday’s game against the Tampa Bay Lightning at Canadian Tire Centre, because he was watching his son play hockey. Smart also serves as an assistant coach for his two boys – aged 7 and 10 – who play at the highest competitive level.

And he does admit to stealing some of the concepts and plays from the Senators meetings to use for his own kids teams.

“The things I hear in the meetings with the Sens, I take it back to the kids’ coaches,” Smart says.

Smart is now regularly on the ice with his sons’ teams – after a 20-year hiatus from playing hockey. He says he played Triple-A hockey up to the age of 15 – until basketball completely took over his life.

Smart’s personal life now appears to be the perfect intersection of basketball and hockey, though it seems doubtful that he would be lacing up the skates to join the Senators for a practice any time soon.

“My skating is getting a lot better,” he says with a laugh. “At least now my wife isn’t panicked I’m going to end up in the hospital.”