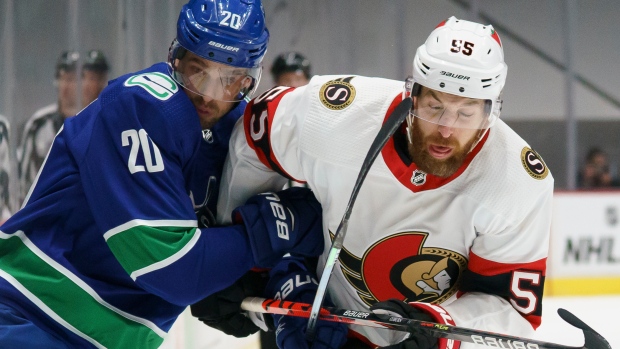 The 35-year-old has one assist and is minus-5 in eight games with the Senators this season. He was a minus-3 in Tuesday's 4-2 loss to the Edmonton Oilers and skated as an extra Thursday morning ahead of the team's game against the Montreal Canadiens.

Coburn was assigned to the Senators taxi squad later on Thursday.

Roster update: Defenceman Erik Brannstrom has been recalled from the #Sens taxi squad.

In a corresponding move, defenceman Braydon Coburn has been assigned to the team’s taxi squad.

The Senators acquired Coburn along with forward Cedric Paquette and a second-round pick in 2022 from the Tampa Bay Lightning in December for Marian Gaborik and goaltender Anders Nilsson.

Coburn is in the final season of a two-year deal signed with the Lightning and carries a $1.7 million cap hit. He had a goal and three assists in 40 games last season for the Lightning and appeared in three postseason games during the team's Stanley Cup run.

A veteran of 972 career games, Coburn was selected eighth overall in 2003 by the Atlanta Thrashers.