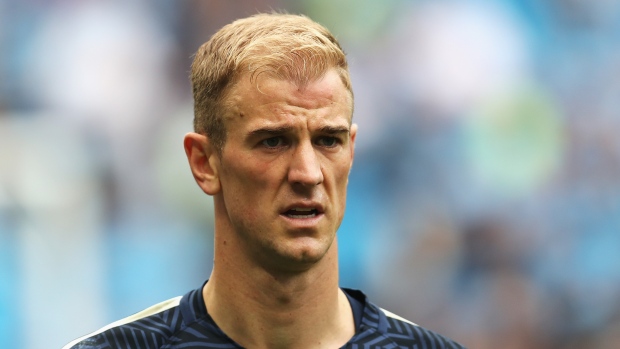 When Joe Hart's contract with Burnley expires on Tuesday, the 33-year-old former England No. 1 will be without a club for the first time in 17 years.

The 33-year-old goalkeeper acknowledges that his days of being in demand are over, but he says he still has a lot left in the tank.

"I am young when it comes to goalkeeping," Hart told the BBC. "I am even younger when it comes to the mental age of a guy who just wants to go in goal and have people whack balls at him. I am under no illusions that Real Madrid are going to knock my door down, get [Thibaut] Courtois out and bring me in. But there is plenty more to come from me. I just need someone to believe in me and I will repay that faith."

Hart has spent the last two seasons with Burnley mostly in a reserve role behind Nick Pope, making 24 appearances over the two campaigns across all competitions. He didn't make a single Premier League appearance this season.

Capped 75 times by England with only Peter Shilton having more appearances in the Three Lions' net, Hart says he won't allow that disappointment to fester.

"The fact I have had to sit on the bench for 18 months in the Premier League is not going to define or crush me," Hart said. "I remember who I am. I remember playing for my local Sunday league team and trying to get into the [hometown club] Shrewsbury Town first team. I learned early - you need to keep things in perspective. You can have great things said about you in football, but you have to be strong on self-criticism, analyse what you are doing and be comfortable with it."

Joining Manchester City in 2006 led to Hart piling up the silverware. In his nine seasons with City, Hart won a pair of Premier League titles, an FA Cup and two League Cups. Personally, he won the Premier League Golden Glove on four occasions, an honour given to the 'keeper with the most clean sheets over the season.

After losing his starting place in the City net with the arrival of Ederson in 2017, Hart spent a season on loan at Torino, becoming the first ever English 'keeper in Serie A, and then one on loan back in the Premier League in West Ham before signing for Burnley.

While the future is unknown for Hart, he remains excited about it.

"Maybe from the outside, people are thinking it is a time for panic, but from the inside it is a time to look forward and see all the opportunities," Hart said.