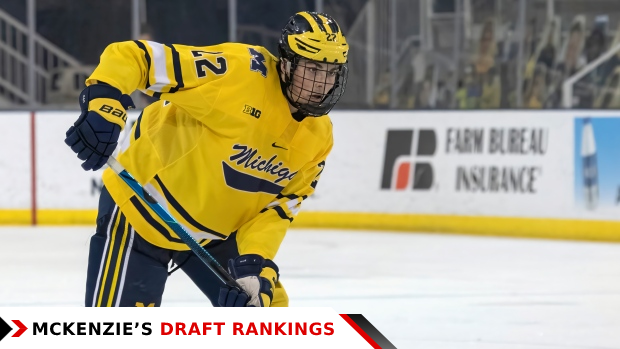 As in, Owen Power.

It’s unanimous - 10 out of 10 NHL scouts surveyed by TSN have the 6-foot-5 1/2 University of Michigan freshman defenceman at No. 1. The Mississauga, Ont., native has solidified and enhanced his No. 1 standing from last fall’s preseason rankings, when only four of those same 10 scouts had him ranked first overall.

That said, it should be noted that Power’s No. 1 status on draft day is not an absolute lock. His mantle is not unassailable. Most of the scouts who ranked him first do allow for the possibility he could still be challenged for top spot and a name other than Power could be called out on July 23.

He is, however, the consensus favourite.

“I don’t know what percentage number you would want to put on it,” said one scout, “60, 70 per cent? I’m not sure. It’s certainly more than 50 per cent, but this is not a draft where there’s one dominant prospect who is the unquestioned No. 1 choice. I mean, it’s close enough between Power and the other top guys that you couldn’t rule out someone else. There are some defencemen who could still challenge him and if the team picking first overall this year really wants or needs a forward, well, there are a couple of forwards who could still be [viable options at] No. 1.”

It’s a draft year like no other. The pandemic has created a playing field that is anything but level. Most prospects haven’t played in the quantity or quality of games they normally would. Some haven’t played at all and some of those who have found themselves in unfamiliar leagues and surroundings.

Scouts have not been able to do much in-arena scouting. And while many NHL scouts are locked and loaded, ready to draft players based on unprecedented levels of video scouting, many of the evaluators are still trying to discern this year’s data and what it all means.

There is no doubt that the upcoming IIHF Under-18 World Championship, scheduled for April 26 - May 8 in Frisco and Plano, Texas, will afford the scouts a wonderful opportunity to see many of the blue-chip prospects in a more “normal” best-on-best environment. (Power, by the way, is not in the U-18 because he’s a late 2002 birthdate and this tourney is for 2003-born players). But even the boon that is the U-18 tourney happening is causing some scouts some consternation when weighed against all that has gone on — or not gone on — this season.

“We have to be really careful not to put too much stock into one two-week tournament,” one scout said. “In a normal year, we’ve sometimes been guilty of putting too much emphasis on that April U-18 world championship, and there’s going to be an even greater temptation to do that this year.”

Power was able to play 26 games for the University of Michigan. As a true freshman, albeit that late 2002 birthdate, Power fashioned an impressive season. He scored three goals and 16 points, but played more than 20 minutes per game in pretty much all situations.

He is incredibly mobile and agile for such a big man. While he’s not considered an elite point-producing offensive talent nor is he regarded as a physically-punishing defensive or shutdown defenceman, he’s viewed as well above average in all the fundamental areas — skating, skill, hockey sense and competitiveness, as well as the ability to move the puck, get shots on goal and defend in his own zone.

“He really had a great freshman season,” one NHL head scout said. “You couldn’t ask him to do much more than he did. He has all the tools to be very good.”

Stylistically, in large part because of his size and position, Power gets compared a lot to Tampa Bay Lightning defenceman Victor Hedman, who went No. 2 overall, behind John Tavares in the 2009 NHL draft. It’s a fair comparison so long as it comes with this qualifier from another NHL scout: “He does look and play like Hedman but if you were comparing [Power] to Hedman at the same age in his draft year, Hedman would be better [than Power] in pretty much every facet of the game.”

Still, the consensus amongst scouts is Power projects to be a No. 1 NHL defenceman. The worst-case scenario envisioned for him, if he weren’t to attain true No. 1 status, is that he’s going to be a top-pair NHL blueliner who can be impactful with and without the puck in all three zones.

If Power were to be unseated as either the top defenceman and/or top prospect overall, the two leading candidates to do so finished in a dead heat for No. 2 on our mid-term rankings list.

One is Edmonton Oil King right winger Dylan Guenther, a goal-scoring shooter who is also quite adept at making plays and playing ultra-competitively in the hard areas around the net.

The other is 6-foot-4 Frolunda defenceman Simon Edvinsson, a rangy, mobile blueliner with size and puck-moving ability who has a lot of the same qualities as Power.

These two players — Guenther and Edvinsson — will be playing for Canada and Sweden, respectively — in the U-18 tourney this month. Whether that gives them an advantage remains to be seen, but what they do in Texas will surely give scouts a lot to think about.

Another potential No. 1 candidate is University of Michigan freshman centre Matthew Beniers, who is No. 4 on the TSN list.

Beniers plays a strong 200-foot, two-way game with a big engine that consistently revs high. Beniers has a sneaky above-average skill level as well. As a late 2002 birthdate, like Power, he is not eligible for the U-18 world championship but Beniers excelled for Team USA at the 2021 World Juniors. Beniers is viewed by NHL scouts as the only legitimate projected NHL centre in our top 15 rankings. Other Top 15 prospects on the TSN list may play centre now, but the consensus view of the scouts is that only Beniers will play that position in the NHL.

TSN’s top five is rounded out by another American, USA U-18 program defenceman Luke Hughes, who is the younger but bigger brother to New Jersey centre Jack and Vancouver defenceman Quinn.

Luke isn’t viewed as offensively dynamic and creative a blueliner as Quinn — not many are, mind you — but he’s still an outstanding skater with great puck-moving ability. And while Luke’s defensive game is raw, he has a much bigger frame to work with than his brother(s). His season, however, is over after undergoing foot surgery to repair damaged tendons because of a skate cut.

The fourth defenceman in the top six of TSN’s rankings is Barrie Colt defenceman Brandt Clarke, who played this season in Slovakia. He’ll be playing for Canada at the U-18 worlds. Even though scouts say Clarke has a bit of an awkward-looking skating stride, he’s perceived to be very much in the mix as a contender for top defenceman in this year’s draft. One scout ranked him as high as No. 2 overall in our TSN survey and he plays a high-end two-way game that is based on what another scout described as “genius level” hockey sense.

Swedish forward William Eklund is on the small side at 5-foot-10, but No. 7 on our list has demonstrated he’s been “hockey strong” while playing in the top Swedish men’s league and putting up solid numbers.

University of Michigan freshman Kent Johnson, a Canadian from Port Moody, B.C., is a flashy, skilled offensive forward who scouts project as an NHL winger. He’s been known to score highlight-reel goals. One scout had him as high as No. 2 for these rankings.

USA U-18 program forward Chaz Lucius checks in at No. 9. He missed the first half of the season with a leg injury, but since returning has been scoring goals and establishing his credentials as a Top-10 prospect. He’ll be playing for the Americans in Texas at the U-19.

Swedish goaltender Jesper Wallstedt rounds out TSN’s Top 10. The 6-foot-3 stopper is viewed as technically/structurally sound but with a healthy amount of athleticism. One scout rated him as high as No. 6 and he’s not only the consensus No. 1 goalie in this year’s draft, but a legit threat to crack the Top 10.

While Wallstedt is TSN’s No. 1 ranked goalie, 6-foot-6 Edmonton Oil King goaltender Sebastian Cossa is very much in that conversation mix. Cossa is No. 14 on our list, though two of the scouts surveyed by TSN ranked Cossa ahead of Wallstedt.

A few final thoughts on this unprecedented and most unusual mid-term ranking:

- There appears to be pretty solid consensus, relative to other years, for the top 13 prospects on this list. Beyond that, it’s much more scattershot and difficult to get as strong a consensus as usual.

To that end, there seem to be a lot more wild cards. Many prospects whose consensus ranks are a lot closer to 75 than 32 on TSN’s mid-term list still got more than one vote in the top 32, so unpredictability would seem to be higher than ever.

One prime example, on the flip side of that, is Carson Lambos at No. 15.

The WHL defenceman was somewhat polarizing amongst scouts even before his season ended for what, so far anyway, is an undisclosed medical condition that will require a procedure, which is currently scheduled for the end of the month. Those medical details are expected to be forwarded to NHL Central Scouting after the procedure has been completed.

Half of the 10 scouts surveyed have the Winnipeg Ice defender in the top 20 (one of them in the top 10), while the other half had him outside of the first round – some of them well outside the top 32. The medical issue may have contributed to that wide variance, but the sense seemed to be that even prior to that Lambos was a wild card of sorts.

- Finnish forward Aatu Raty is a cautionary tale for armchair scouts projecting a year or two out who may be a candidate for first overall in any draft year.

A year ago, and certainly even two years ago, there was much talk that Raty was a legitimate threat to go No. 1 overall in 2021, but his stock has been plummeting since last fall. Raty was No. 8 on TSN’s pre-season rankings list in November and finds himself at No. 20 on this mid-term ranking.

Half the scouts surveyed by TSN still see him as a Top 20 consideration this year — for those who like him, he’s projected a third-line, two-way NHL centre — but the other have him outside of the Top 32 and decidedly so. It’s fair to say his stock appears to be trending in the wrong direction.

- Even though there’s a limited amount of draft-eligible hockey still to be played — the U-18 worlds is the remaining jewel — there’s every reason to believe the variance and volatility from this mid-term ranking to the final ranking that will be done in July (just in advance of the July 23-24 NHL draft dates) may be substantial.

NHL clubs will have months to drill down on video, Zoom interviews and quite possibly a number of showcase-style events that could arise to supplement the limited viewing this year’s draft class has received. Which is to say, these rankings could change significantly in the weeks and months to come.