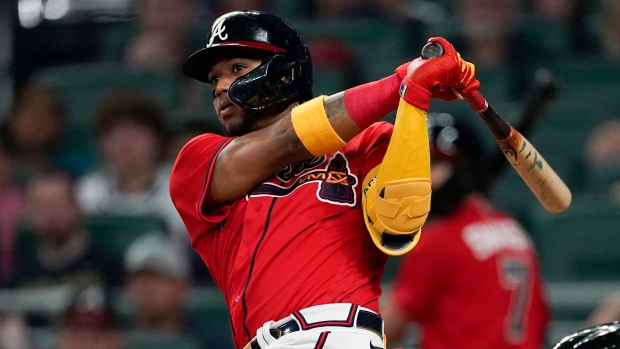 ATLANTA (AP) — The Atlanta Braves' training staff told Ronald Acuña Jr. to be ready on the bench if needed.

That was all Acuña needed to know.

Acuña's pinch-hit double tied the game and he scored the go-ahead run on Ozzie Albies' two-run bloop double in the seventh inning as the Braves recovered after blowing an early three-run advantage to beat the Miami Marlins 6-4 on Friday night.

“You know me, I'm always ready to play,” Acuña said through a translator after being held out of the starting lineup for the third straight game due to a strained right quadriceps.

Miami led 4-3 before Acuña's double down the left-field line off Anthony Bass (1-2) drove in Matt Olson, who led off the seventh with a walk. The sellout crowd of 40,064 at Truist Park was still celebrating Acuña's hit as Bass walked Dansby Swanson.

“I just had an instinct,” Swanson said. “For a split second, I felt like his attention went to Ozzie or his eyes moved. It was something as I was running to third that I processed that he was like on his second read.”

Soler threw the ball to Joey Wendle at third base instead of to the plate.

“It looked like he had a little bit of hesitation,” Marlins manager Don Mattingly said of Soler. “I know Dansby ran through the stop sign. ... I don’t know if he saw it, too.”

“That's our style of play,” Acuña said. “We are always going to play hard. If a team is caught sleeping a little bit, we're going to take advantage of that situation.”

Jackson Stephens (1-1) had two strikeouts and allowed no hits in two scoreless innings behind Ian Anderson.

Braves manager Brian Snitker called the comeback “huge” as the defending World Series champions (22-24) “are trying to get going.”

“Those kind of wins can just be so good for a club's psyche,” Snitker said.

Kenley Jansen gave up a one-out single to Brian Anderson in the ninth before recovering for his 11th save in 13 chances. Jansen struck out Jacob Stallings and Jesús Sánchez, each on called third strikes, to end the game.

Jesús Aguilar hit a go-ahead, two-run homer in the sixth inning as Miami took a 4-3 lead after trailing 3-0.

Garrett Cooper also hit a two-run homer in the Marlins' four-run sixth off Anderson. It was a quick answer by the Marlins following Atlanta's three-run fifth against Trevor Rogers, who was perfect through four innings.

Austin Riley's fifth-inning homer produced the game's first run — and Atlanta's first hit. Travis d'Arnaud followed Riley's homer with a double off the glove of shortstop Miguel Rojas into left field. With one out, William Contreras drove in d'Arnaud with a double to the wall in center field.

Rogers allowed three runs on four hits and one walk in five innings. It was an improvement from his last start when he gave up five runs on eight hits in four innings in a 5-3 loss to the Braves on May 20.

“He was a lot better today,” Mattingly said.

Travis Demeritte snapped an 0-for-34 slump with a run-scoring single to left field that drove in Contreras in the fifth for a 3-0 lead. Following his first hit since May 14, a grateful Demeritte placed his hands together in a prayerful pose as he stood and smiled at first base.

Marlins: IF Jon Berti returned from the COVID-19 injured list, while OF Avisaíl García was placed on the list. ... Berti started as 2B Jazz Chisholm (sore left hamstring) missed his third consecutive game. Chisholm is running and participating in hitting and fielding drills. ... LHP Jesús Luzardo (forearm strain) has not resumed throwing. He was placed on the IL on May 15, retroactive to May 12. ... Wendle (right hamstring) had no hits in his return from the IL.

Braves: Acuña ran the bases before batting practice and could start on Saturday. He remained in the game in right field following his pinch-hit double. ... LF Marcell Ozuna (lower abdominal tightness) started after missing one game.

Braves LHP Tucker Davidson (1-1, 8.71) will make his first career start against Miami when he faces Marlins ace RHP Sandy Alcantara (4-2, 2.11) on Saturday. Alcantara threw a complete game in Sunday's 4-3 win over the Braves in Miami.