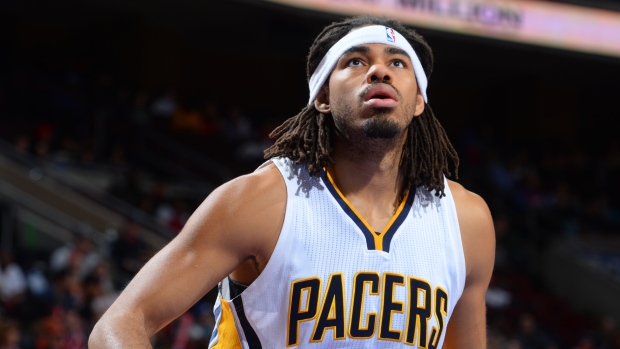 NEW YORK, N.Y. - Indiana Pacers forward Chris Copeland, his wife and another woman were stabbed outside a Manhattan nightclub early Wednesday following an argument on the street near a Chelsea club that also led to the arrest of two Atlanta Hawks players, authorities said.

The violence broke out just before 4 a.m. Wednesday outside 1Oak Club, a trendy Chelsea spot where celebs like Justin Beiber and Snoop Dogg mingle with Manhattan partygoers. Police say the couple was arguing on the street as the attacker eavesdropped, and started to interfere. The dispute escalated until the 22-year-old suspect pulled out a knife and started slashing, police said.

Copeland, 31, a former member of the New York Knicks, was stabbed in the left elbow and abdomen and his wife, Katrine Saltara, was slashed in the arm and across the breast. The third woman, who was believed to be with the attacker, was slashed in the abdomen. The victims were hospitalized and in stable condition, police said. The suspected attacker was in custody, and a knife was recovered at the scene.

Atlanta Hawks players Pero Antic and Thabo Sefolosha were arrested on charges of obstructing the crime scene, after police said they blocked officers from trying to start their investigation. The players were in town to play the Brooklyn Nets at the Barclay's Center on Wednesday night. The team arrived late Tuesday, after beating the Phoenix Suns in Atlanta in a victory that set a single-season franchise record with 58 wins.

Garin Narain, the Hawks vice-president of public relations, said in a statement to The Associated Press on Wednesday morning that the team is investigating the matter.

"We are aware of the situation involving Pero Antic and Thabo Sefolosha this morning," Narain said. "We are in the process of gathering more information and will have further comment at the appropriate time."

Hawks officials did not indicate whether the two would play Wednesday night. They are largely bench players, averaging less than 6 points on a team that has locked up the top playoff seed in the Eastern Conference.

The Pacers were in town to play the Knicks; Copeland played with the Knicks during the 2012-13 season. Pacers President of Basketball Operations Larry Bird said the team was aware that Copeland had been injured.

"We are still gathering information and will update when we know more. Our thoughts are with Chris and those injured."

The nightclub had been cited at least 10 times for altercations and four times for noise in 2014, according to a New York Post report. Calls to club went unanswered Wednesday.

Associated Press writers Jeff Martin in Atlanta and Rick Callahan in Indianapolis contributed to this report.